Came across those four wonderfully detailed photos from a Norwegian town named Notodden in Telemark county. The riders represent NMK (Norsk Motorcykel klubb) Notodden, a branch of NMK and have an endurance race of some sort as there are riders with numbers attached. 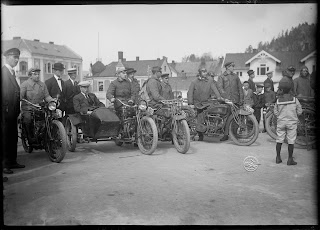 H212 & H803 are both early Indians from the Wigwam in Springfield, whilst H215 & H853 are both big X`s - Excelsiors from the Scwinn factory in Chicago.
A sidenote, still quite intriguing; the boy in the right side of the photo admiring the riders and their bikes are by no doubt of Asian origin. This might have a link to the fact that King Chualongkorn of Thailand visited Notodden some years earlier? 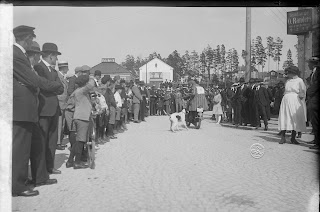 A dog attack one of the riders. 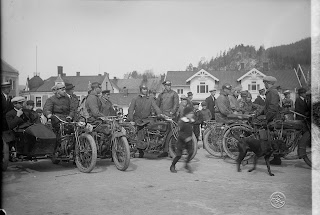 Kid and dog on the run whilst the photo is taken. 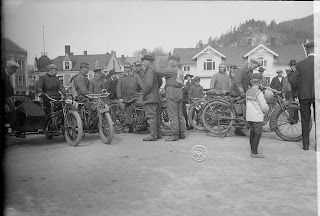 Young boy looking with admiration at the riders.
--
The next two photos are just two from a bunch of photos by Schrøder - a well known photographer in Trondheim. They are shot at a motorcycle race that took place on the ice of Lianvannet near Trondheim in March 1928. 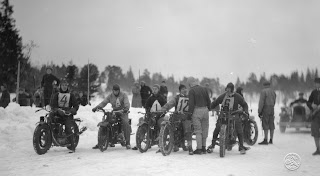 From left, FN, BSA, HD model B, another FN and to the far right a well known rider from this blog, Bjarne Wisth on a HD twin with outriggers and skies. 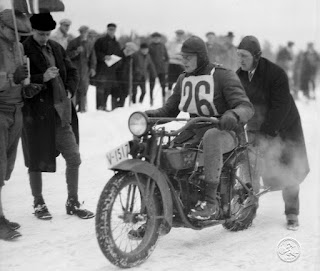 Rare bird, a Norwegian Super X. Not many photos of Super Xès to be found from here. There is some oddities with this one. Bike seems to be a 28 according to the fork with exposed dual springs and the skirted fender. Still it has an un-braked front wheel. The 28`s had front brake, one can just wonder why this dont?
Lagt inn av American motorcycles kl. 12:59 Ingen kommentarer: