Desember is supposedly the first month of winter, still today we faced the first snowfall.
Depressing.
When I know they will now start polluting public roads with salt, I realise the 2012 motorcycle season have come to an end.

Still I feel like I have managed to stretch this season well.

Had one great ride Wednesday when Henning asked me to join on a ride into the countryside. Sun, but still cold as temperatures have been below the freezing point at night for quite a while. Henning rode his most moderrn bike, a customized Suzuki offroad, well it might be more correct to explain the bike as minimized, rather than customised?
Anyway, my pick was easy, the "not so dirty nine" W as this have a sheep fur cover on the seat, its just great when the temperature fall towards freezing. 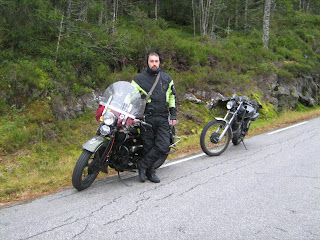 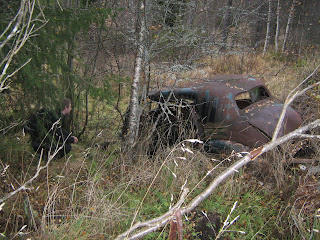 Yeasterday night we had 8 degree celcius below, still Friday showed up with blue skies, and a phone call from Villy. He wanted to have a last trip on his Chief before it would be left to hibernation.
OK, both me and my W where ready for another day on the road, after all there was only a couple of degrees below in the shade.

Upon Villys arrival it appeared he had been joined by an odd team of riders, all keen on stretching the season to the limit.
On Russian K750 sidehack, a Chinese ChangJiang bobber, oh yes baby, nothing less than a Chinese bob-job and finally a Jap bike off less interest.

What a strange company touring local country roads that day, two old US made V twins, a Russian sidehack, a Chinese bobber and finally a Japanese racing bike.

This time we did find ice on the roads, had to be pretty carefull when riding in the shadow, still a fantastic day. 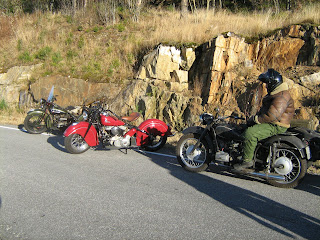 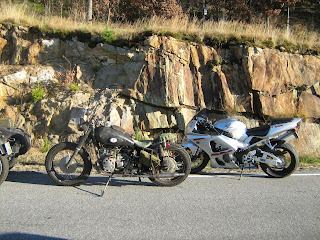 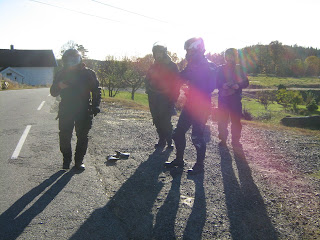 As Flash Gordon on his way to the planet Mongo I will ride black Bessie streamlining the accompanying fighter jet. 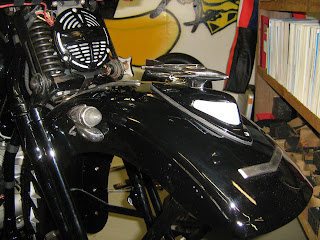 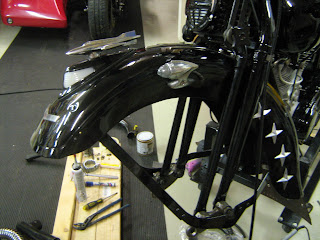 Chemistry is a messy business

I am slow, a slacker, sometimes.
My friend Geir is restoring a just beautiful FN OHV from the late twenties (Its actually my fault as I pushed him onto the project).
A loooong time ago he asked if I could nickel plate some smaller partts for his engine, yeah sure, no problem.
And then time is going, and there is always something else to do and poor Geir is one of those that neither begs nor yell out, just patiently wait.
Oh well, this weekend my conscience told me to get it going in the nickel plating department, this as well as the fact that none have so far been able to have a bath in my recently refurbished bathroom, this as some home made fittings where still missing(yes you read those words, home made fittings).

I bet there are more folks than me who know the feeling of satisfaction when something you have promised way to long is finally done?

Enclosing a pic of my partially home made bath tub faucet from the late teens and its home made stainless tig-welded post. This now makes it possible to relaxe in my 1912 Norwegian-made cast-iron bath tub. 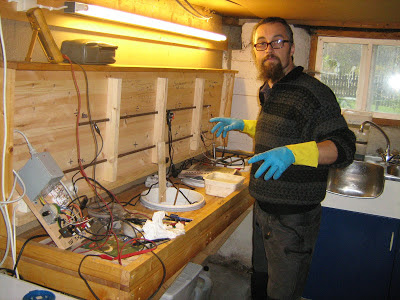 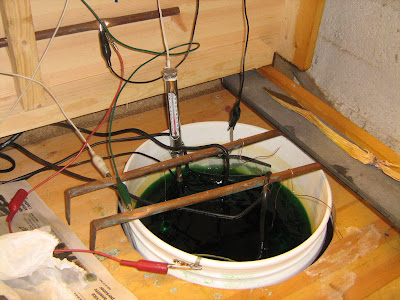 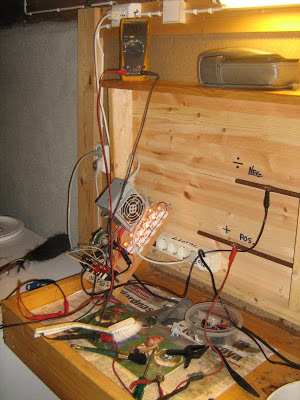 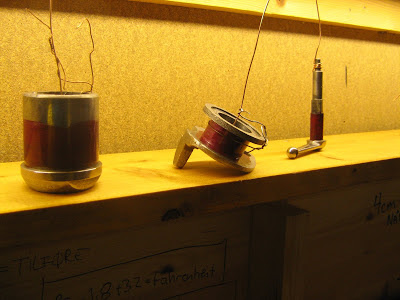 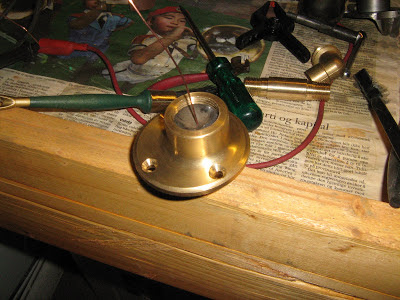 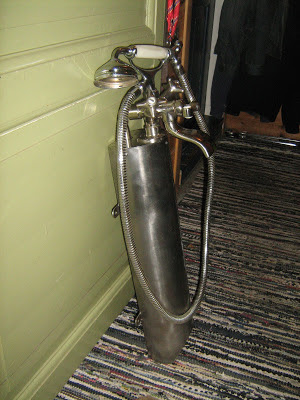 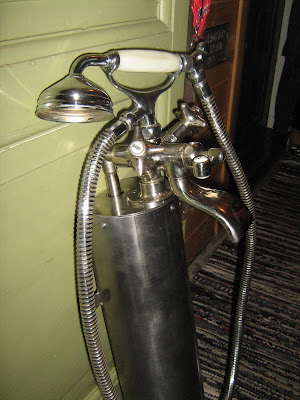 Hiiiahh!!
Engine is back in the bike, all bolts lubricated and tightened as well as secured with cotter pins.
What a tight fit from seat post to rear head, why didnt the inventors leave just a little bit more room?

My black Bessie girl, I dare to admit I`m looking forward to our relationship on the road, Yahoo (big grin). 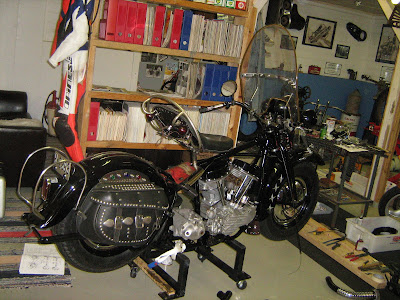 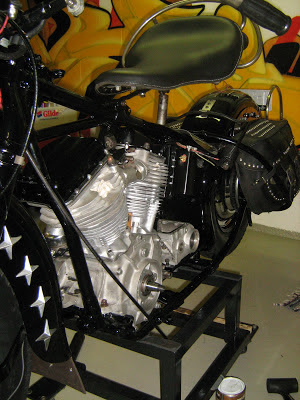 As usual October is wet, seriously wet. Its been pissin down for more than a week in what seems to be an endless flow of water from above.

When the sun finally showed up in a glimpse recently it was time to get the ol hog out for just another spin before winter arrives with snow, ice and salted roads.

Colors of the leaves before falling to the earth as well as those already fallen are what I find most fascinating when riding these days, lets hope there is more chances to enjoy October from the saddle. 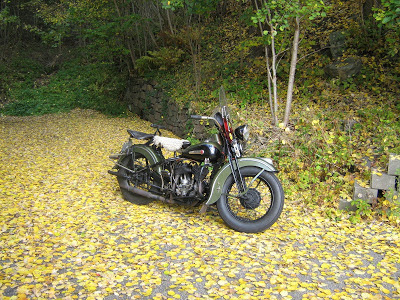 My Swedish e-mail friend Uffe is a constant source for interesting pics. He and his mates have a bunch of early Harleys, Flatheads as well as the earlier IOE`s, and as I have stated in previous posts, they use and abuse them as they where intended to when leaving the brick building in Milwaukee.

Enjoy with me this latest pic from Uffe, its his mate Ronny`s cave, an early Harley heaven!! 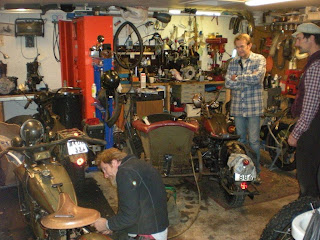 Today is a rather quiet day at work, make me start dreaming.


One of them places I wish I had been at in time is the abandoned building of the Dixie Distribution Company (Inc) in Springfield Oh, once a thriving aftermarket motorcycle parts dealer. 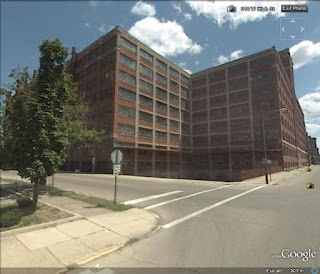 Now the building have been locked of for years and years, still according to those I have learned to know that have been inside the building it used to be like an Alladins cave for anyone interested in NOS Harley parts and periodic custom parts like Superior mufflers, and more. 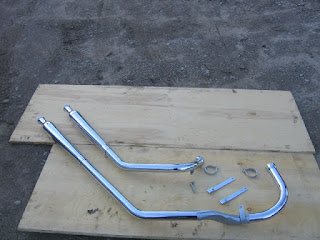 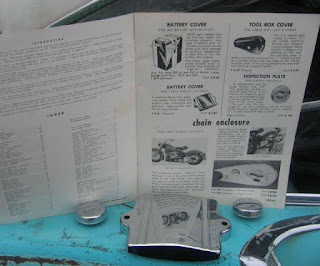 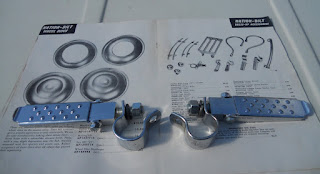 Much of them 50-70ìes Harley custom and aftermarket goodies that have been found on e-bay for years now have come out of this building trough the hands of a selected few being allowed to search in there.

After all I am happy the owner of all these goodies didn’t just call the recyclers, that is what have happened in god ol Norway with many an old inventory through the 30 years I`ve been bitten by the old bike bug.

Hell yeah, have not been too many additions in the pics from yesterdaze coloumns lately.

To be honest (honesty is always preferred) I have had to have a time out from this part of my cicle fever.

There was such a lot of different tracks to follow, old ladies and gentlemens to talk to and pictures to get hold of my head was boiling at times.
Enough sobbing, I am back on track and want to start off with a Injun Powerplus and two pleased lads enjoying the fun of motorcycling. More from the same album will come soon!

Special note to the "Sunnmørs mob", anyone know if this bike is still around, would appreciate any feedback. 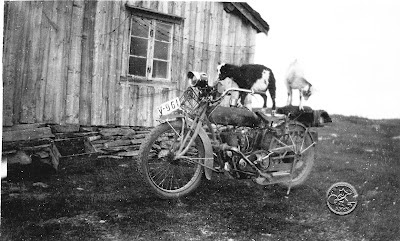