A ride from the Norwegian capital Kristiania (Oslo) to Trondheim and back in 1919 was as adventureos as crossing the Mongolian desert by motorbike today. The total distance of the route was 1179.7 Km`s and calculated riding time was 42 hours.
Roads in Norway them were just two single mud paths of various depth caused by the common traffic, horse carriages with their high ironclad wheels.
When NMK (Norsk Motorcykle Klub) advertised such an endurance race to be held during a weekend in late August, a group of 21 brave men met with their bikes at the starting line at "Festningsplassen". Of the 21 bikes there were 17 solo machines, three sidecar outfits and one cycle car. The great race was to start Friday afternoon, and hopefully all riders were to be back by Sunday afternoon, Chr. Fougner who had planned the route had estimated the race was planned to last 42 hours.
Before the start had taken place it appeared just the thought of the ride and the bad weather scared off 7 entrants, hence the number of participants leaving Kristiania was now down to 14 riders, 13 solo bikes and the cycle car.
In a short time after the start, another 6 riders had given up due to bad roads and technical issues, most of them before Kongsvinger, today this is a hours ride out of Oslo. Among those that did not get to Kongsvinger was the cycle car.
A total of 7 bikes managed to get all the way to Trondhjem. Rider Andreas Bjørnestad on his Harley was the first to cross the city line. Then followed Oscar Wiger on his Reading Standard, Erik Gotaas on his Excelsior, Lauritz Larsen (bike unknown by now), Macke Nicolaysen reading Standard, I.L. Vister on an Indian, and finally the Dane Theilman-Ibsen on his BSA.
After a short nap and some intense motorcycle maintenance the riders started on their return back to Kristiania.
During the ride back mr. Larsen crashed his bike not far out of Trondheim, at Svorkmo, and had to give up the race. The remaining six riders continued their race towards Kristiania (Oslo).
The first rider back to Oslo was Mr. Wiger on his mighty RS machine and a mere second later 19 years young Mr. Gotaas on his Excelsior, both men arrived in Oslo just before 9 Sunday evening.
Third was mr. Bjørnestad on his Harley Davidson. Bjørnestad had lost both time and points due to helping other riders with their technical issues along the road. On top of that he had an accident near Toten that knocked him out for quite a while.
Fourth was Mr. Vister on his Indian Power Plus, fifth Dane Theilman.Ibsen on his little BSA single cylinder (the only bike participating that sported a front brake) and finally Macke Nicolaysen on his RS who arrived Monday morning at 09.40, twelve hours behind Wiger & Gotaas.
When the race officials had gone trough the feedback from inspectors along the trial the points for those that got back were as follows;
Erik Gotaas 390 Points, Oscar Wiger 403 Points, Andreas Bjørnestad 465 Points, I.L. Vister 558 Points, Theilman-Ibsen 1035 Points and finally Macke Nicolaysen with 1150 Points.
The winner of the Trondhjemsridtet 1919 was Mr. Erik Gotaas. 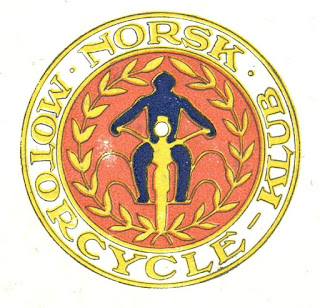 The early NMK logo, from when NMK still was a motorcycle club only. 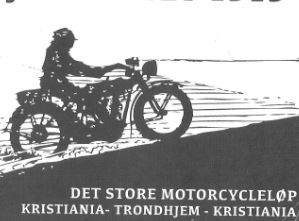 Overview picture taken at "Festningsplassen" in Kristiania/Oslo Friday afternoon before the brave men are heading off for Trondhjem.
Having studied this picture for hours and hours, used all available documentation from periodic newspapers, as well as comparing the faces of the competitors with photos in my own collection, I dare to suggest to a certain point who is who in this picture. Further details are found in pictures below.
From far left with a canopy is seen a cyclecar, this belonged to Paul Pedersen from Gjøvik. Next bike is C192 Harley Davidson, owned by Eng. Sverre Strand (Kra) who was in charge of the event and had a role as judge for the race. He shared this role with Chr. Fougner and Chr. Wisbech both from Kra. Next bike as we continue to move towards right is E690 unknown rider, then a Harley Sidecar outfit where we are not able to see the reg. plate. Next a Reading Standard again with unknown rider, next is Dane Theilman-Ibsen and his tiny BSA, next is A1686 Reading Standard with rider Oscar Wiger (Kra), then A3176 another Reading Standard with Macke Nicolaysen (Kra), then Ax22 a Harley with unknown rider, C469 Excelsior with young Erik Gotaas (Lillestrøm), E984 Harley and unknown rider, A1947 Excelsior with rider G.S. Borrebek from Gjøvik, E832 Harley Davidson and rider Robert Nilsen from Gjøvik, A1996 Harley Davidson and rider Andreas Bjørnestad (Kra), A1616 Henderson and rider Arne Fladager (Kra) and finally an Indian, B788 and rider I.L. Vister from Askim. From the start list we know we have the following not counted for; Konrad Ott (Kra), Ragnvald Waagard from begnadalen, Alf Haugen from Askim, Laurits Larsen from Kra and finally Reidar Holmsen from Sandvika.
I would like to say thanks to Bue David Andersen and Bjørn Andre Johannesen for help with this work.

Further info on officials for the race is mentioned to pics below.

To the left in this picture are four men in front of the riders on their bikes, those are from right to left; Rittmester Chr. Fougner NMK judge, Ragnvald Gundersen NMK inspector of all bikes to participate, Halfdan Sanne NMK time inspector, Fredrik Elster NMK official starter off all riders. 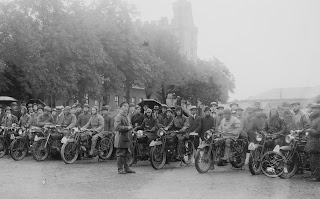 NMK (Norsk Motorcykle Klub) chairman engineer Sverre Strand (pic center) is talking to the riders prior to the start of Trondhjemsridtet 1919. 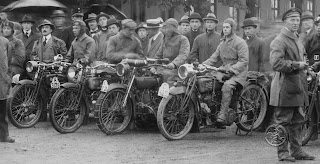 A good pic of C469 with rider Erik Gootas who was just 19 years young.

A1997 and G.S Borrebekk who rode all the way from Gjøvik to start in the Trondhjemsridtet 1919.

Third rider from left is the only foreign participant, Mr. Theilman-Ibsen on his tiny BSA. The BSA is the only non US made bike in this race, and the only bike with a front brake as early as in 1919. 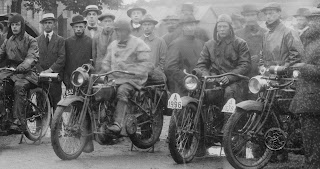 A1996 with Andreas Bjørnestad who would participate in many of the Norwegian motorcycle races in the years to follow. To the right is A1616, Henderson model Z with engine nr. 2z3830 owned and ridden by Arne Fladager from Kristiania. 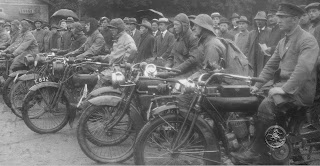 E832 Harley Davidson 1918, registered between 13.00 & 15.00 on the 24.01.1919 by "Electric Burau" in Gjøvik as a corporate vehicle. Nevertheless they have trusted young Mr. Robert Nilsen from Gjøvik to lend the bike for the 1919 Trondhjemsridtet, wonder if they regretted this subsequently.

The only Indian to participate in Trondhjemsridtet 1919, and rider I.L Vister from Askim. 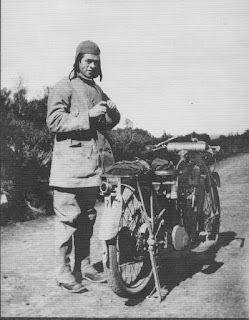 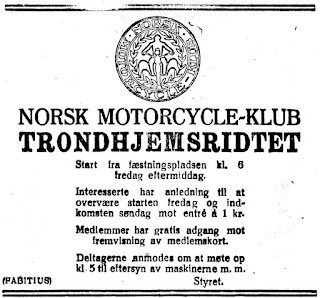 This add was posted in most capitol newspapers in the days before the start of the great race. 4-500 spectators arrived in the early morning hours at Festningsplassen in Oslo on Friday 29 of August 1919. 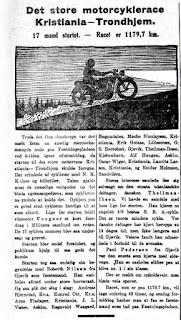 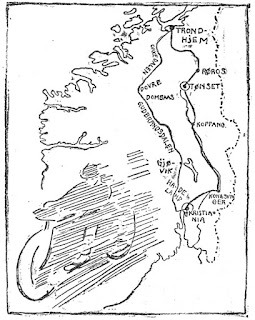 The route went to Trondhjem by Kongsvinger, Tønset and røros, the route back via Gubransdalen. 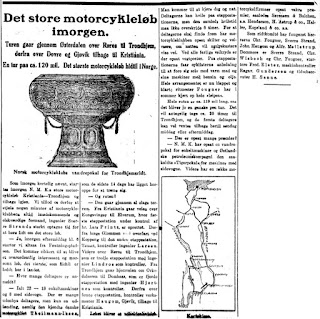 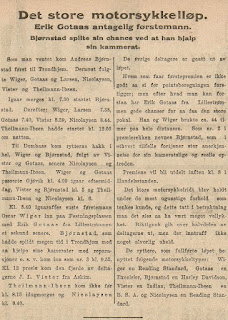 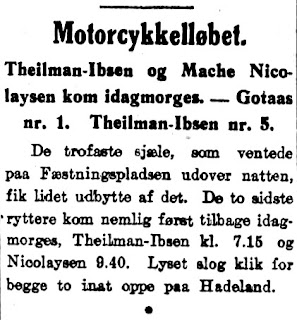 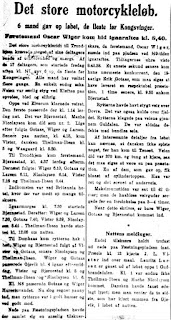 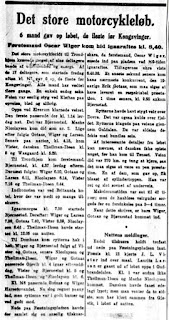 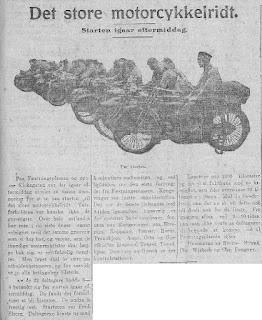 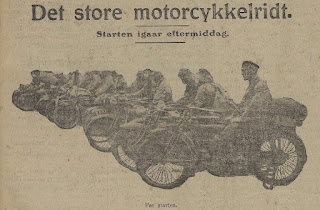 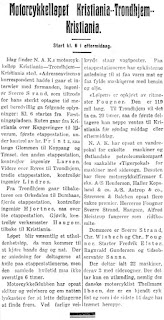 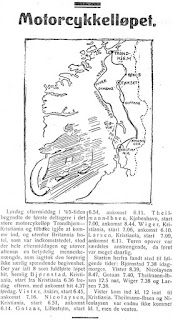 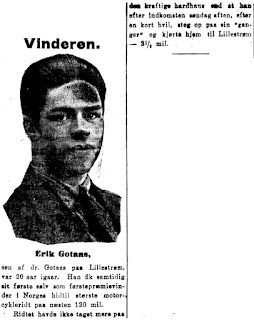 The winner, Erik Gotaas celebrated his 20`th birthday during the day of prizes being handed out to the participants.
Added 16.09.2020:
The writing above came to good use in 2019 when it was used as an article in Norwegian Vintage Motorcycle Club`s magazine to celebrate Trondhjemsridtet`s 100 years!! 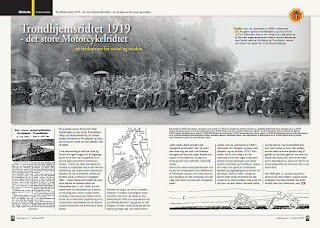 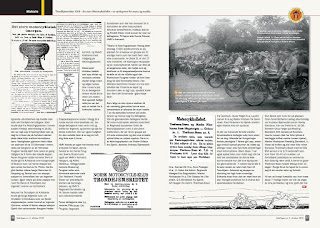 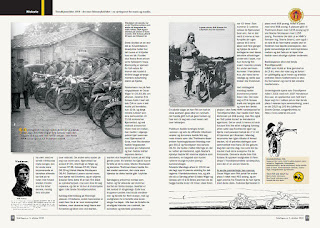