I had a previous post on "Harley Nilsen", this mechanical genius , Harley lover, Harley racer and working class hero, hence riding & racing under the AMK (workers union motor club) flag and have tried to get hold of more photos coveringhis career, no success until recently.

This would soon change when discussing historical motorcycle photos with Ole Birger Gjevre, a senior NVMC member who is the only one as far as I know having received King's Medal of Merit for his efforts to preserve the history of vehicles.   As a curiosity I need to tell I first met Ole Birger when I was a very young, though a motorcycle dedicated man. This happened when I joined my first motorcycle rally ever, Trollrally at Kvanhøgd back in -82 (damned, time goes fast). I had ridden my 1939 DKW NZ 350 cc for more than 250 kms away from my parents home, no driving lisence, this was still two years ahead of me.
Ole Birger stayed in the tent next to me, riding a Nimbus 750 inline four. On my other side the guy rode a 1927 Harley, never had I been anywhere in such a crowd of old motorcycles and riders.

OK, story continues as follows, Ole Birger told me he had got a photo showing an unknown pedal car as well as a old Harley Davidson motorcycle. When receiving the photo I knew I had seen this rather customised Harley IOE before, it once belonged to Harley Nilsen, his daughter still keeping a model of the bike in her living room.   As I knew what capabilities Nilsen had as a craftsman with metals, I had no doubt the unknown pedal car was a Nilsen product, which a phone call to his daughter could confirm. Needless to say Ole Birger was more than pleased when this piece fell into place in his puzzle. Had the pedal car survived? We still dont know, I guess it is like with old motorbikes, the hunt will continue.

I am so excited by old pictures telling so many stories by their details; 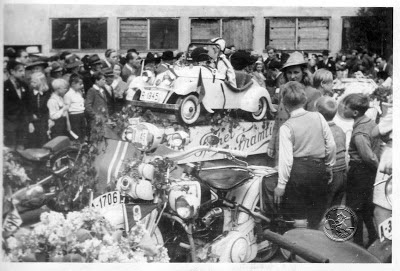 The pedal car is actually parked on top of the sidecar roof as the sidecar made by Nilsen had a hard top, no canvass.
The scene is from May 17-1946 when celebrating Norway's National Day. Keep in mind the WWII ended in -45, there was a lot of reasons for celebrating.