"Oh Damned it Dagny" the story

Those whom have stayed tuned to this blog is familiar with several names once a part of the Norwegian motorcycle racing scene during the late teens and twenties. Names such as Jac. Hansen, Bjarne Wist, Nic. Lunde Sr, Macke Nicolaysen, Herman Oppen, Alf Granheim, Ernst Vaumund and several others.


Were there any women in this male dominated enviroment? Did women drive motorbikes at all in this early days of motorcycling?

Yes there where a few of them.

Since then I did some more research on Dagny with great help of one senior vintage motorcycle owner living in the neighbourhoods of a close relative from since long passed Dagny.

Per Erik living at Kongsvinger was actually one of the founders of the NVMC back in 1974, he have a bunch of nice motorbikes such as Henderson and ACE. Thanks to the help of Per Erik I was able to make a story on Dagny for the NVMC club magazine "Sidevogna".

I will make a translation of this text as a follow up of my previous post and you will all learn the story of "Oh damned it Dagny" as I did.

Who was Dagny, this brave woman riding her Harley in a race as tough as the Korketrekkeren?

The story of Oh damned it Dagny!

Dagny was born on the first of July in 1907 and she grew up at the farm Graff in Hernes close to Elverum in the eastern parts of Norway, just above our biggest lake Mjøsa. Graff was a rich farm in constant development at the times when Dagny grew up.

At the farm a school in household for young woman had its premises, it had many teachers and pupils and was well known in its time.

Dagny soon developed to become a real tomboy, not affected by the nearby school for young women to become perfect wives. Off course a great deal of stubborness was required from young Dagny to live like this in the early 1900`s She became an eager hunter in nearby woods along with her brothers and father and her father got Dagny her first hunting rifle as soon as she became a teen.

Dagny, as she was a tomboy would soon adopt male habits, habits such as swearing. Hence her nick "Oh damned it Dagny", in Norwegian this read "Fy Faen Dagny".

If Dagny was influenced by her older relative Oluf Graf when she at age 18 took her driving licence and bought her first bike we dont know, still I would imagine as Oluf Graf grew up at the nearby farm Sande in Løten. Dagny and Oluf where relatives and their families spent time together.

Oluf, several years older than Dagny had been on twoo wheels since his 18 birthday too, hence I think its fair to believe he lit her interest in motor biking. 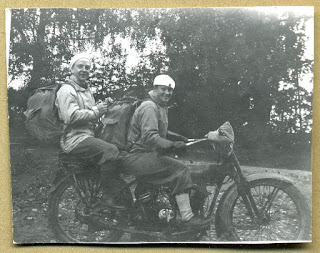 Dagny on her first Harley having just got her driving lisence. Check out the smile on her face, redy to hit the road. A girlfriend is on the pillion.

Not only did Dagny ride a motorcycle as was a male sport, as a young woman her father helped her in purchasing a log cabin that was taken apart and moved to the most remote spot in the easter mountains where a truck could go.

When loaded off the truck, the cabin was again erected and Dagny baptized her hiding place "Taboo" (taboo in the Norwegian language is tabu, the word bu is the same as cabin hence this name; Tabu).

Dagny spent a lot of time at Taboo and during the WWII she stayed there for 5 years. At this remote location there where no german soldiers. As she had kept her guns (which in itself was strictly illegal) she hunted and shared the trapping with farmers living close to the mountains in Rendalen. This was truly appreciated as there was a lack of food during those hard times. After the war had ended, Dagny and a guy named Bjøntegård was given the job to bring down the reindeer population in the eastern mountains as there during the war years had been no official hunting.

Dagny and Bjøntegård did in a short time bring down the reindeer population, Dagny herself did kill more than a 1000 deers with her Krag rifle and its said she could kill a deer, flay its skin and cut it apart in ten minutes. 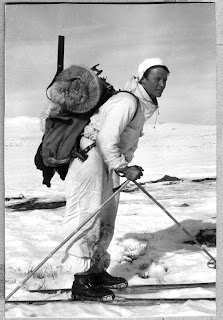 Not only did Dagny hunt for reindeers, she allso shot several wolves, foxes and wolverines, selling the skin for cash. In a newspaper article in Dagbladet in 1956 she was refeered to as a Norwegian Davy Crocket, others gave her a new nick, "Dagny the queen of wilderness".


As a fotnote, not only did Dagny kill her own food, she was well known for her quality moonshine, if there was ever a party she would be in charge of the booze.

When not staying at Taboo Dagny lived in Ophus at Storelvdal, this is a farmer comunity in the Rena region (east of the river). How many years her transportation was by means of Harley Davidsons I have not been able to find out, still I know her first Harley, a 1917ìsh magneto model was bought second handed. The second bike a 1926 modelFD 74" (1200cc), the FD another magneto model, this one fitted with acetylene lights. When participating in the Korketrekkeren she used the secon Harley, then with all excess gear such as lights removed.

There is no doubt Dagny had managed to become a NMK member as we can see in pictures from newspaper clips her bike have a small NMK enamel plaque on the handlebars as most NMK members had then. 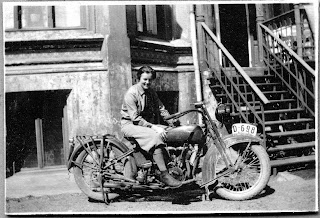 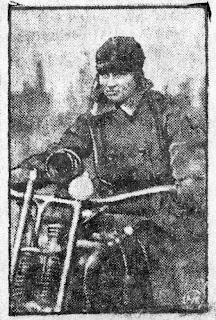 Dagny ready to start in the 1927 Korketrekkern hillclimb.

According to a Aftenposten report on the 1927 Korktrekkeren:


Miss Møystad unfortunately faced technical problems in the end of the event. This was a great shame as she had a remarkably driving technique. Her starts and her gearing is close to perfect and her skills should be envied by many of her male competitors. The unfortunate engine problem made her miss becoming amongst the winners, which would have been well deserved. 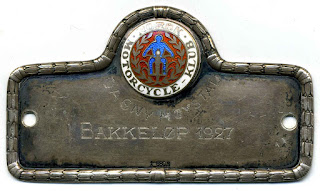 Dagny got this plaque when participating in the 1927 Korketrekkeren, according to her relative it was mounted on her bike until sold many years later.

Dagny would stay with motorcycles as transport, even at her older years, though with less engine displacement than the big Harleys she rode as young. This fact would eventually become her faith. At age 71 her motorbike was a Zundapp 90cc, and one day when Dagny had been in a nearby village picking strawberries she on her way home (after dark) met a huge truck loaded with fish from western Norway heading for Oslo. The truck made such a turbulence that Dagny was thrown in the ditch along the road. Even if she wore a helmet hear head injuries was so severe she passed away silently at Elverum hospital in the late summer of 1978.

Afterwords:
Even if Dagny passed away far to early, there is no doubt she lived her life as she wanted, motorcycling, fishing and hunting and she was for sure not bound by the norms average in surrounding society.

Sources;
Trond Berger interviewed by Per Erik ØO. whom in addition to the interview scanned the relevant pictures from Dagnys albums, pictures from albums once owned by Oluf Graff, Dagnys niece Anne Marie at Kirkenær.