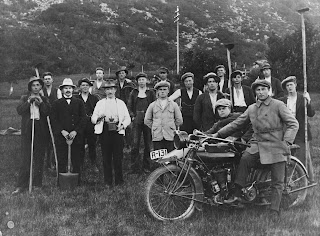 This cool picture from the Western part of Norway show Jakob Kjellevold with his sidecar equipped Indian 1915 or 16 (its chassis is the early Hedstrom design but a closer look at the engine show its sidevalve. They where in this chassis for only two years?).
There should be no doubt that Jakob is the boss for this team of guys working with the development of the telephone system in rural parts of western Norways. On could say that Jakob have a boss`s attitude (and he have an Indian too). 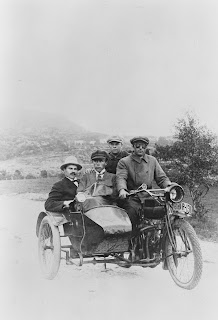 Jakob with his three brothers as passengers, cool picture.

Bike is running with acetylene lights even on the sidecar. State of the art then.
Lagt inn av American motorcycles kl. 00:57