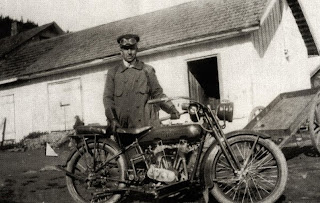 Came across this quality image showing Bredo Feiring and his late teens/early twenties Harley 61" (1000cc). The oilpump is included in the engine timing cover on these early models Harleys. This was later changed to a cover where the oilpump acted as a separate part.
Bredo and his Harley operated in the Hedmark region.
The Harley is a magneto model whit full acetylene light equipment by Harley Davidson.