Have just got all my motorcycle gear hung up for drying after having spent the night in the woods, tenting along with some other morons, daredevils, enthusiasts, whatever fits best for guys going by motorcycle in the worst wheater ever to drink booze sleeping in tent when other stay indoors in front of the telly tube with the electric heating on top notch.

Checking my e-mail gave a nice surprise coming in from Anders in Sweden whom I meet at A-Bombers last. Anders drive an old school panhead chop, by himself categorised as a "lollipopcandypan" wich is quite true!
Anders shared with me (and you) some real nice pics from Yesterdaze showing an ACE. Its rare to see photos of those early fours compared to the overwhelming lot of pics showing Harleys and Injuns. 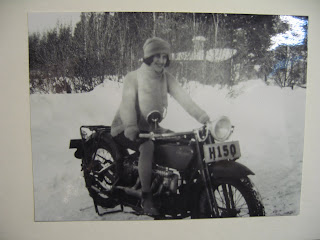 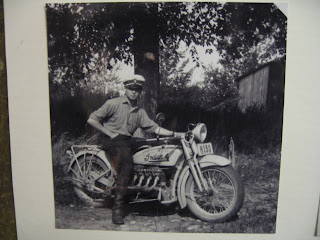 What is intriguing with these two pics is why the owner of the bike H-150 gave it a total face lift from its dark blue ACE colours to bright white with the Indian 4 logo?
ACE had cream white as an optional colour. ACE where purchased by Indian in 27 becoming the Indian ACE in 27. In 28 the old ACE chassis was discontinued and Indian 4 model 401 was borned. This means the bike pictured is (my theory) upgraded from beeing an ACE to become an Indian 4 when painted all white. Why, Indian 4 would most likely be cooler among fellow motorcyclists than a discontinued ACE?
Lagt inn av American motorcycles kl. 13:23