"While the engine spins" 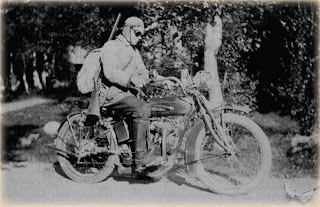 Thinking back on what I have experienced and who I have meet trough my 30 years of hunting for old motorcycles or remains of such, some persons come forward as more outstanding than others.
Outstanding in that way, they have lived their life as they have felt suits them selves, not following the path of the general society.

Some 20 years ago me and a friend, into old motorcycles too came to the dead end of a remote gravel road having passed several abandoned farms. An old 18`th century farmhouse rested next to the courtyard (hardly so) where we parked our bikes to have a stretch and maybe a peek in the surrounding areas.
Then this old chap came out of the house which the both of us had believed was resting since long gone residents passed.

He gently said; “I suppose you`re here to rob me, two guys wearing helmets and leathers”.

My friend saying, “that would be robbing you for two cups of coffee”,

Being invited to the house was like stepping back at least a century but this guy was sharp as a knife. His decision to move from the city to this remote place had been taken many years back to get closer to the nature and to bee free from all the stress of the modern society.
We learned to know he as a young man had spent time hiking the deep forests and mountains of eastern Norway with his hero and mentor, the famous Norwegian author Mikkjel Fønhus (1894-1973). Listening to him telling his stories was really fascinating and when leaving we promised to come back eventually another day to rob him for more coffee.

Time flies and next time when my travels lead me to this remote place I found the old chap had passed and I was never going to learn any more from his stories.

I`ve known for years Mikkjel Fønhus as a young man was a eager motorcyclist as this was mentioned in the NVMC club magazine followed by a photo showing the author astride his bellowed Indian.
When recently looking trough a book “I kveldsøkta” by Mikkjel Fønhus (posthumously) and his daughter Gudbjørg, I found this cool novel describing the feeling of driving your motorcycle “Mens motoren surrer / While the engine spins” written as early as in 1919.
Having spent a short time with google I even found the story translated to English by one Norwegian Indian guru, Jan E. Kristoffersen. His efforts make it possible for you all to read even if not being familiar with the Norwegian language. We owe Jan for this, thumbs up.

Reading this story and looking at the picture of Mikkjel Fønhus and his Indian make me remember the since long passed recluse I once met who told me his personal experiences from hiking with this guy that whose novel you are now about to read;
http://www.mikkjelfonhus.no/docs/Fonhus-eng.pdf 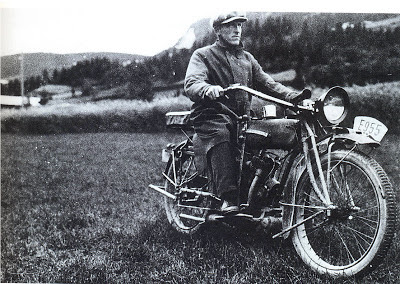