This is one cool photo from the late teens, gently provided to be presented on this blog by "Levangs bilder", a site dedicated to the preservation of pictures representing the history of this mid-Norway community.

The bike riders in the photo have payed a visit to the village of Lekne and some of their folks are keen to be captured with those brave guys and their machines.
U106 at far left is a 1915-16 Excelsior from Schwinn in Chicago, no lights on this bike. There is neither no lights on what appears to be U75, a 1915-16 Indian Power Plus still sporting the old "Hedstrom" chassis to be skipped the following season.
To the right is a "silent grey fellow" with sidecar. This 1916 Harley Davidson looks kind of fresh compared with the two other bikes, its grey cellulose enamel on the fuel tank is shining brightly. 1916 was the last year of the grey paint introduced back in 1906, pedals for alternative muscle power was now an option (last year) replaced by a kick starter on the three speed gearbox and the chassis was upgraded for 1916 sporting a fuel tank with rounded edges. Our Harley U34 is a fully electric model, introduced in 1915 the headlamp style was to be continued to 1918. The electrical components in those years where made by Remy and supplied to Harley Davidson. 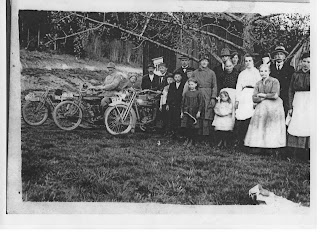