Sorry folks, its spring and not much time left over to spend in front of the computer.

A while back I got finnished tough this story on a since long passed proud Harley owner, enjoy.

There have been pictures of both this rider, Anders Vandvik and his Harley on this blog before. Digging deeper into the story behind those previous shown captures not only lead to more pictures of Anders and his bike, it allso got me in contact with his daughter Liv and a very dedicated local historian Eistein, spending his time collecting photographic history from the Verdal region in mid-Norway. His work is presented on Verdalsbilder.no.


Anders Vandvik whom is the proud owner of the Harley Davidson in those pictures was borned at the farm Vandvika in 1899. Anders stayed in his parents home in Vandvika until leaving at age 24 in 1923, his surname tough would remind him where he grow up.

Times where tough in the early part of the 19`th century, Anders as other country side lads had to start working in young years to supply to his family income, not much time for school then.
The first couple of years his work where periodical but he was soon to be a blacksmith prentist in a nearby town Levanger for 2 ½ years. Working as a blacksmith might not have fullfilled Anders dreams as he stayed in this bussines for half a year only. Anders now turned to work with electricity having completed a lettercourse in this proffesion. In 1922 he went back to school and soon applied to a school to learn what was required to become a teacher. Working as a teacher must have been what suited Anders well, he kept with this forthe rest of his professional life.

Anders got his first job as teacher in a small community, Kleppen. Getting a steady income allowed him to buy the Harley Davidson we know from those pictures. This bike was his only transportation for close to ten years. According to Ingeborg interviewed at age 90 who later would become his wife, she would never know for sure if it was an act of God or the view of the Harley that made her decide leaving her previous date, a local priest in favour of young teacher Anders when he asked her to become his maid. Any male unmarried teacher at this time was obvious in need of help with cooking.

Anders where truly engaged with several hobbies, one major hobby was photography another was playing the fiddle or singing in a chorus and he did work as volunteer with IOGT informing people with the danger of alcohole. Anders himself stayed away from alcohole all his life.

Working as a teacher countryside meant Anders had to visit other local schools to teach and he would frequently be seen carrying his pupils in the sidecar as well as on the pillion. Thanks to his interest in photography he would bring the camera with him when riding, or he rode just to bring the camera. Either to capture what was going on in his area and thanks to this we can now 90 years later enjoy those images of early Norwegian motorcycling and transportation.
As shown by the images Anders god friend Hans Figenschou was a regular guest in the sidecar when hitting the road for a Sunday outing.

Some facts on Anders Harley,
Bike appears to be a 1920 or 21 model F magneto ignition with acetylene lights. There have at some point been added a electric generator, hence the large lamp on the left fork leg. Its hard to tell here this generator is mounted, a quite common setup was adding a splitdorf generator mounted below the front footboard rod, driven by a pulley mounted on the side of the motor sprocket.
Sidecar seems to have Swedish origin, they drove on the opposite side of the road at this time hence left side attachement. The sidecar is for sure of european manufacture.
Thanks to Verdalsbilder.no/Eistein/Liv Liberg

Picture text in the same order as pics below:
Anders and Ingrid, "wife to become".

Anders and his friend Hans dressed up for some special occasion?

Anders and Harley filled up with his pupils from a local country school.

Anders and Hans on a Sunday outing, might Ingeborg be behind the camera?

Another roadside stop. One can just wonder if all those folks came by the same Ford V8.

Another capture of Hans and Anders roadside chatting with some locals. 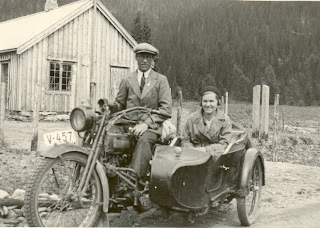 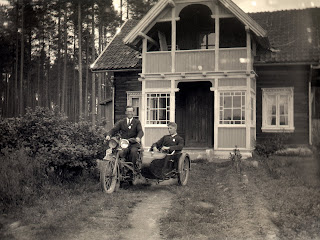 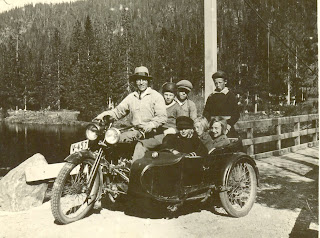 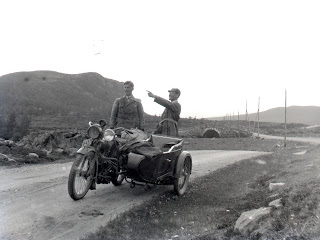 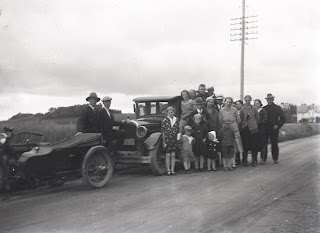 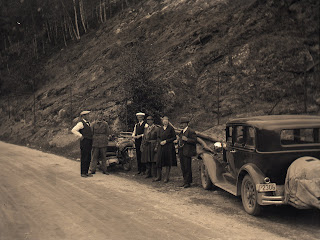