OK, I have had my -39 W 45" (750cc) for several years now and have never heard of any other Norwegian 45"`s (750CC`s) from this year during this period of time. There are a few -38`s and several -37`s, but -39`s, nope, none other, nada else than one OHV that is well known.
Until recently when I learned to know Thomas in Stavanger who indeed had a -39 himself. One that he had owned since the seventies when bought in Western Norway at Sunndalsøra where it had served as transportation for a postman.
The bike had been in service from 1939 until 1961 and Thomas started using the bike in the mid eighties and still does. Did not get many years rest that old W did it?

If by chance anyone from the Sunndalsøra area come by this blog and have heard of this bike, let me know. 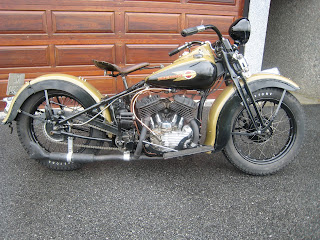 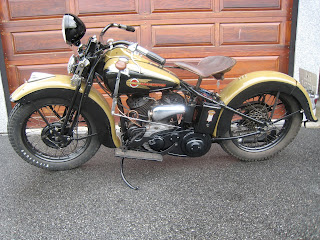 I had hoped mine W and this would have been closer to each other in engine numbers, tough not even close at all. Strange as I would have thought Sørensen and Balchen bought bikes early in the season in bulk, not one by one?