Barry is another true vintage motorcycle user that I've learned to know through the www.
Many years ago I had a wanted ad on Georges Antique Motorcycle Trader, I was so desperately keen on owning one of the stylish Harley racing jersey`s that I had seen the Rakkestad Harley 45" mob were using at the Ekeberg jumble.

The ad at Georges gave no response, and since long had I forgotten my ad.

That was until months later when I all of a sudden got an e-mail from Canada. Barry that was, had been looking back trough the wanted ads and seen my request.
He had a jersey for me (actually two), one that is still used when I take a spin on any of my ol Hog`s, though now with new arms sewn on when the old ones came to an end.

Barry have a bunch of great motorcycles that I have no problem to say I admire him for. Better still, they are not kept inside a ventilated box, nope, they are used and abused on the gravel roads that surround the old mill where they are kept.

As we both have the pleasure to own Henderson`s De-luxe model, I find it cool to be able to present some pictures of Barry`s Henderson sidecar outfit on this blog.
His "other brand" four seems to have sneak itself into one picture, this I dont mind at all, hopefully neither do you. 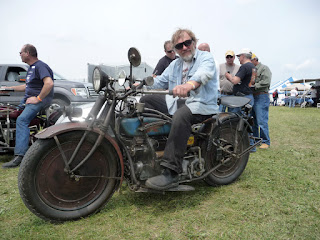 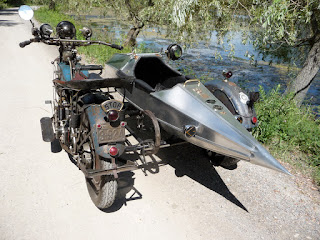 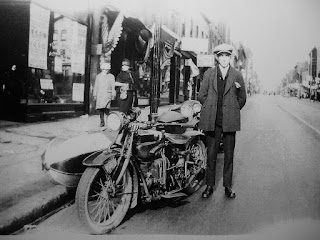 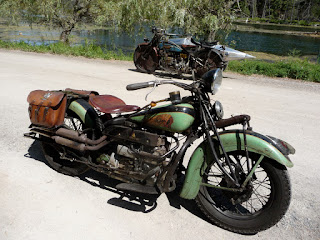 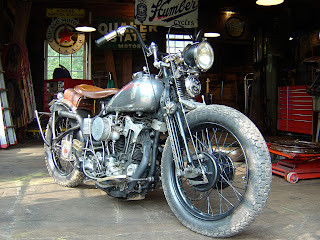 This is a bike off such great interest, need to be a post on this one only at some time in the future.
When did you see a thirties Harley VL with Koslow heads last?