There are some motorcycle events I just need to go to, even if I at times wonder why I still does so.

Trollrally is one of those, being the first motorcycle rally I visited back in 1982 when I rode a DKW NZ 350 from 1939.
This years Troll became my 28 event, not to bad.

This year I decided to ride the old Henderson, after all my magneto is now overhauled and I am pretty confident with the old hen.  I left all technical worries behind when I left home in the early morning in a beautiful weather, looking forward for a 400km`s ride in a day going forth and back trough three county`s on mostly single lane country roads. Along with me came da`boss Øyunn and our friend Odd, the last carrying some of my tools and a couple of spares in his Guzzi sidecar, just in case.

Its so cool to ride an old bike on winding roads, averaging a 50 miles speed and the old Henderson is so well handling, its all just joy. When I reached a mountain pass from where you can actually see the Trollrally`s location from the top I just let the Henderson climb the slopes in the same speed as I had held up trough the valleys, worked fine, no hard breathing from the four (at least I thought so).

Having had a stop at the top of the pass to make some photos from the scenery it was time to get going. Kicked the four into life, hmm, it did not sing the same tune as before.

Could not instantly tell what was wrong and after having changed spark plugs and cleaned the carb jets without any success in getting the false tone better I decided to climb down to Fyresdal, the nearest town and Troll`s location to further investigations of the problem.

I headed to the local gas station where they in addition to the hotdogs and soft drinks have a tractor workshop, remember we are at the country side now.
I soon realised the exhaust valve on the rear cylinderhadde had severely jammed in the guide, no chance to jerk it loose from the cam follower side.

When trying to open the valve plug (keep in mind the old hen is a sidevalve I realised my home made tool for this was not capable of the torque required to remove it.
Remember its Saturday and workshops are closed, but again this beeing the country side, the guy running the shop was nearby and I was allowed to bring the Henderson inside and offered to use all tools required to try to repair, THIS WOULD NEVER have happened in more urbane locations, I know from previous experiences.

Long story short, we did manage to get the plug removed by some serious tractor tools, one man operating the 50" long wrench, one man hammering on top of the socket and three men holding the bike. We all agreed that the threads on the plug had seriously jammed and I was afraid to see the result when the plug would finally come out.

When the plug was out there was no visual damage to the threads, and I could even turn the plug back in easily by hand????

Finally when I had access I forced the valve out, sanded the stem and the guide as well as reground the valve surface towards the seat.
Voila, some wrenching and the Henderson was back in operation we could continue the last tiny bit to the rally

At Troll you will always meet old friends from the bike scene, this time I met several. Among those were Olav who rode his 48 Pan all the way up from Østfold, a decent trip for an old Pan. Olav is a lucky guy in that he can chose from several old US cicles when planning a trip, both HD and Injun.

As I had spent three hours wrenching I soon realized evening (and darkness) was coming close and we had to start heading towards down south. This time our path would cross another mountain pass on really narrow and bumpy single lane roads, climbing up to the mountains by a huge number of serpentine bends.
Just as well I think as I then had to ride in second gear to manage the curves, and even then I kept grinding my floor boards (during my climb I kept wondering how often Henderson floor boards gets worn through Norwegian bends these days?), another fact is when in second I put less strain to the engine and hence kept my rear cylinder cooler avoiding another exhaust valve accident.

Darkness is a relative factor. When we had about an hour left to ride it was dark, very dark indeed. And that is when my Splitdorf electronic regulator decide to blow up my 6 Volt gel battery, Kapoow!
No lights, none.
I had to follow Øyunns Beemer taillight for the remaining trip, whow I was exhausted when finally home.

All in all, even if some technical issues a great experience that I would not have missed. To ride a 86 years old Henderson is such a thrill, its so damned well handling in curves, OK there is a lack of brakes but still a great motorcycle even today.

Thanks to all those great lads that volunteered in helping me at the workshop in Fyresdal, and in particular to the owner for letting me be there for no charge!!!! 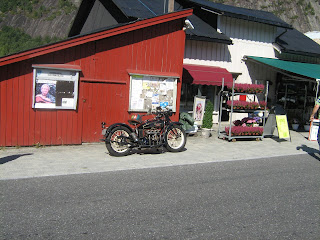 In Åmli on our way up the valley towards Telemark. 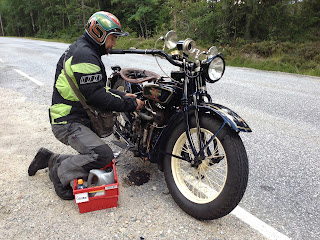 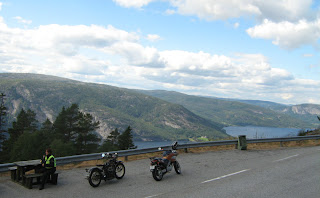 Top of the mountain (I am still luckily not aware of the exhaust valve problem). 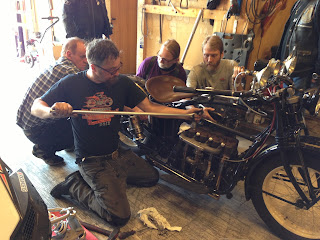 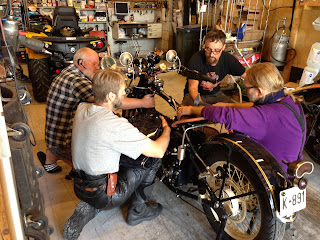 Many gearheads is better than one? 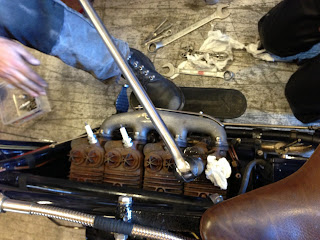 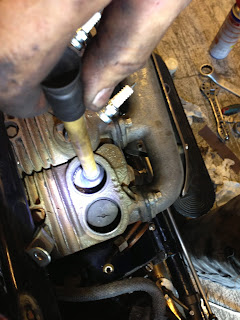 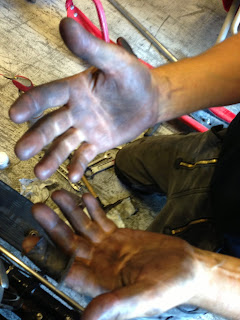 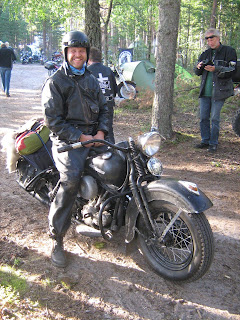 Our friend Olav is always smiling! 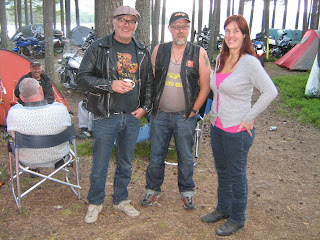 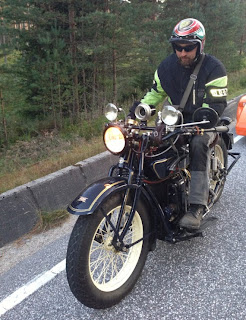 On our way home, its getting darker hence the light (it would become very dark eventually).