Those are some great photos I have been allowed to use by the owner, Rasmus. His grandfather also named Rasmus took this motorcycle trip across the mountains in the western parts of Norway in June 1925 with his brother Olaf and their and two sisters  Hanna and Ingeborg as well as a couple of friends whoms names are not known.
They drove from their home at Langeset nearby the small city of Stryn by the Sognefjord. Their trip took them across the Strynefjellet mountain pass to the mountain village of Grotli where they stayed over before returning back to the lowlands by the fjords.
The bikes are an Indian Power Plus with a FLXICar sidecar, and a very well maintained Reading Standard pulling a FLXI Arrow Speedster sidecar. Both sidecars are of the non flexible type that was made by FLXI in addition to their fully flexible model. Here in Norway those FLXI`s was rare sidecars even back then. 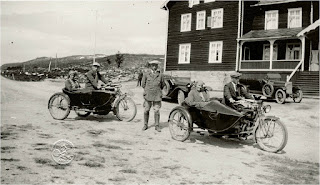 Indian to the left with Ingeborg in the sidecar and Rasmus behind the handlebars, to the right in the Reading Standard`s sidecar is Hanna, an unnamed friend is seated on the bike. Both bikes are parked outside of the Grotli Hotel. 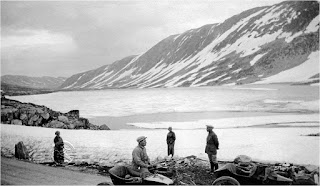 From left, Ingeborg, Rasmus with Indian, Hanna and Olaf with Reading Standard. A stop during the mountain crossing. Still ice on the lakes. 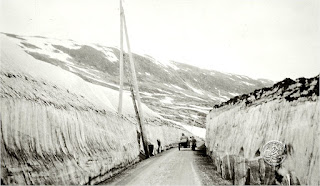 Crossing the Strynefjellet mountain passes in June show the snow along the road is still several meters high. Notice the black stuff on the snow, this is not just gravel and dust from the road. Early in the spring, workers on skies followed the path of the road on top of the snow and strewed black dust on the snow to get the sun to melt the snow where the road was. 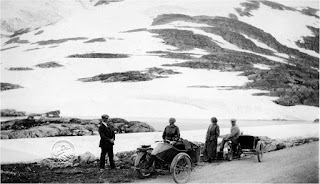 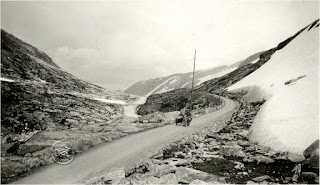 Climbing slowly down from the mountains towards Grotl. The tall poles along the road is those used by the guys on skies strewing black powder, by following those poles they knew where the road was located underneath the snow. 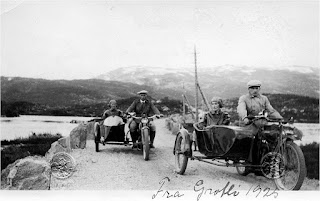 Having crossed the Strynefjelelt on their way down the valley to Grotli, from left Hanna, Olaf, Ingeborg and Rasmus. 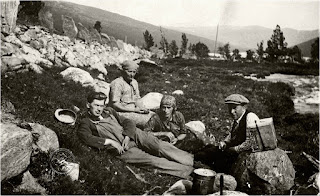 Having crossed the mountains getting down in the valley it is time for a stop and a meal next to the road. Not much traffic back then. I like the stones raised every 4 meter along the road to prevent drivers from missing the road. 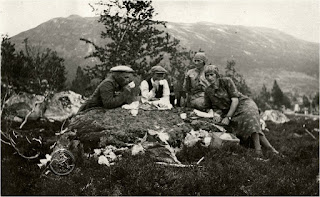