"The Muroc Special" / Cutdowns, the predecessor of the bobber.

The story of this bike is one that takes us back in time to 6 April 1936.
Depression still had a vice-like grip on the western world, and in Europe Fascist`s had started their march towards the War. And at Muroc Dry lake, an alkali mudflat located several hours north of Los Angeles, something happened that would change motorcycling history and leave Harley-Davidson`s executives absolutely furious.

Up until the stock market crash in 1929, the Harley Davidson factory in Milwaukee-Wisconsin had been riding high with more than 21000 bikes sold each year on the global market. But by 1933, Harley was making just 3700 bikes a year. From their humble start in 1905, HD`s single cylindered motors - and later from 1911 to 1929 their twin`s - had all been made with the first engine design, the F-head engine. An engine where the exhaust valve was on the side, and the inlet was above the cylinder: from an engineer`s construction perspective back then it kind of represented the best of two worlds.

From 1929 on, the old F-head engine was retired in favor for the side valve motors. First came the 45” D models in 1929, then in 1930 the 74” V models was launched, marketed as a work horse.
Motorcyclist`s then, as now, have a need for speed. And Harley`s customers fondly remembered the last two model years of the old F-heads – 1928 and `29 – when the fast F-head Two-cam motors had been offered to anyone willing to pay extra for extra performance. Prior to 1928 these same Two-cam bikes had only been made available from the factory`s racing department to those in the global racing scene with a reputation that warranted such desirable machines. Of course if you were part of the HD official race team you were first in line for their fastest bikes: like Otto Walker who in 1921 trashed his banjo chest Two-cam to an average speed of just above 101 mph during a 50 mile race at Fresno Speedway.

Every other bike rider who wanted to go really fast before 1928 would have to make do with trying to improve the performance of their f-head single cam. The easiest way to do this was to reduce weight, so these guys started cutting down their bikes to look more like the racing bikes of the day; a practice that continued even after Two-cams became more generally available after 1928.

More skilled road racers would hop up their F-head single cam motors by using home-cast Riccy chips inside the heads to simulate the combustion chamber design created by Ricardo for HD and it`s limited production 61” cylinder special in the late twenties.

Other tricks would be to increase engine displacement by adding stroker fly wheels, fitting high compression pistons and so on. The popularity of the F-head cutdown made it possible for professional builders like Sam Oppie, Finnegan Spear and not to forget Lance Tidwell & John Cameron to build bikes to sell, not just for their personal use. These guy`s names are all connected to the Harley F-head due to their number of cutdown builds.

By the mid-30`s, Harley had refined the V further and offered a high compression VLH model with ten more horse power. but the older F-head Two-cam`s and even a hopped up single cam F-head in a “cut-down” chassis were still hard to beat. On the track, hill climbs and on the streets, the F-head motors would still outrun the side valve.
As early as in 1931, the H-D factory had authorized their engineering department to start developing a 61 cu. in OHV pushrod engine. It was not for the first time: H-D had become famous in the early days of board track racing for their 8 valve OHV racers. Those where F-head bottom end`s, with special cylinders and heads. In addition to the 8 valves they had produced the Peashooter, a small single 21cu.in cylinder motor that developed a reputation for speed despite its diminutive displacement.

By 1935 Harley was ready to show their dealers the first glimpse of what had been a open secret for quite a while: “The OHV twin” … later to be universally known as the “Knucklehead”.

This new OHV was the superbike of its day: it had dry sump lubrication where the older models had “total loss” lubrication. In the F-head design the engine depended on the oil being flung onto the moving parts by the crankshaft, no oil pressure to worry about. Furthermore, the Knucklehead had a totally enclosed valve train and cylinders and heads with big cooling fins, the F-head had most of the moving parts for the valve train exposed and a minimum of fins on their cylinders. On paper the Knucklehead engine – designated  “E” – offered the rider double the power of an old f-Head. But its weight had increased too…. a lot. The 1936 Knucklehead stood at 565 pounds wet with one gallon of oil onboard whilst the old stock JDH Two-cam F-head weighed 150 pounds less.

It is easy to understand the importance of the launch of the Knucklehead for the HD factory at the time. The huge investment needed to develop this bike during the dark economic times of the great Depression had swallowed much of their previously earned money. The Knucklehead was heralded as the machine to restore Harley`s sales figures to the pre-Depression glory days.

So it`s little wonder that what happened at Muroc Dry lake on that fateful day in 1936 caused such upheaval. Speed racing at this location had started in the early thirties and became a popular place for LA's speed demons and motor tuner`s to test their skills against likeminded bikers. Getting there was a challenge, you had to climb narrow steep single lane roads, trough twisting canyon`s that eventually lead to a 3429 foot`s summit, then back down 700 feet to get to the Mojave desert. From there on an unmarked desert trial lead to a barrack that was the railway station surrounded by just four more buildings. This was Muroc where the race course started. 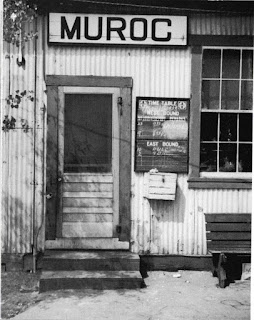 Early in the morning of 6 of April it was freezing cold, but nevertheless 50 motorcycles – pipes roaring and crackling – lined up to compete in “The Muroc Free For All”.

The field comprised 23 Indians, two Crockers, and 25 Harley-Davidsons. The event is AMA (American Motorcycle Association) sanctioned, all bikes would race an electrically timed one mile straight, and all had up to three runs to achieve their best speed.

After a long day`s racing with temperatures rising from the freezing cold to boiling hot, the results were compiled and posted. They showed that the two fastest bikes out of the 50 were both F-head Harleys. Winner is Ernest "Tex" Bryant riding his 1927 Two-cam cutdown, at a speed of 118,42mph. Second is L. Powell on a 1924 single cam F-head cutdown at 115,38mph. Bryant and Powell on their obsolete F-Head Harleys beaten Harley`s new superbike the Knucklehead, as well as Indian Altoona racers and two Crockers.

A newspaper cutting from a few days later reads,
“Sidelights about the Muroc speed trials are interesting!”
It is interesting to note that the fastest competitive jobs where not the present production side valve types such as used in “their” 74 and 80 cu.in jobs, but where the old 2 cam or O.H intake valve types built several years ago and which were admittedly fast machines in their day. It would appear from the results that the older models are far faster than, not only “their” current side valve motors, but much faster than “their” new 1936 OHV 61 cu.in. 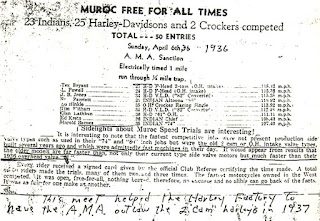 --
“Their”, of course refers to Harley Davidsons management and you can only imagine how pissed of they must have been by these results. Their all-new Knucklehead beaten by an old relic on clincher wheels. The Harley factory immediately started lobbying the AMA and in early 1937 the F-head machines were outlawed from AMA sanctioned racing. The excuse given? Their lack of brakes…. as if brakes have ever been important in speed trials!

This could well have been the end of the story, both for the F-heads as speed racers and for those who still believed in F-Head power. But not so.

Winner of the “Muroc Free For All”, Ernest “Tex” Bryant (“Tex” was his Californian nickname as he moved there from Texas) would in 1937 gather a group of 11 top seated Californian motorcycle racers to start a motorcycle club, “The 13 Rebels”. 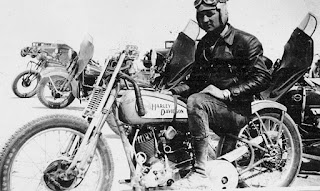 Amongst those racers where many names still known, such as Floyd Emde (Don Emde`s father), famous racing brothers Johnnie & Ernie Roccio, Elmo Looper (who used to work with Al Crocker making the Crocker motorcycles) Wino Willie Forkner and John Cameron. Those last two mentioned were later thrown out of the 13 rebels because of their boozy behavior; they went on to form their own club, aptly named “The Boozefighters”.
As the F-head`s were now outlawed from AMA sanctioned racing events, guys like John Cameron who favored the Two-cam Harley`s all his life, and other likeminded with the same bikes - or those who could not afford to buy a Knucklehead or later on hot 45`s - competed at what would be known as “Outlaw racing” events. These F-head Harley cutdowns maintained their reputation as very fast motorcycles right through the thirties, ridden by a group of dedicated owners who never lost faith in the obsolete engine technology .

We all know what the Outlaw racing eventually lead to. The small town of Hollister in California was host to both the Boozefighters and the 13 Rebels in 1947; the events there changed motorcycling forever.

Way before I realized the historical significance of the F-head, I had always liked the sweeping lines of the later Harley F-head models from 25 to `29.
The fragile look of the engine with all valve train exposed and the overall no-nonsense look of the bike appealed so much I had to have my own. I bought my first, a 1927 JD, 25 years ago and restored it to original specifications.
Since then I have gathered pretty much anything F-Head I came across at a reasonable price. To get quality reproduction parts for the old F-Heads has always been a problem, but the first US coast to coast Canonball race for vintage bikes in 2010 prompted manufacturers to start reproducing quality parts for these bikes. The F-head Harley was the most popular choice for those competing in the first Canonball, and the resulting explosion of interest in this model means it`s now much easier to restore – no basket case is beyond saving.

When visiting the Davenport AMCA (Antique Motorcycle Club America) meet in the US back in 2009, I had my first contact with a real Finnegan Spear modified Harley F-head cutdown.
This bike represented to me the essence of all what I liked with my original F-head Harley, and a fire was lit to create the bike you see here. Luckily, I already had most of the parts needed among my F-head stash. The result is shown in the pictures, a 1927 F-head model J cutdown named “The Muroc Special”. 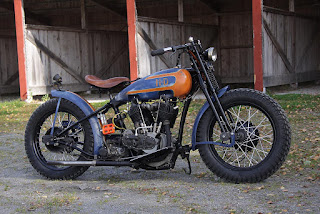 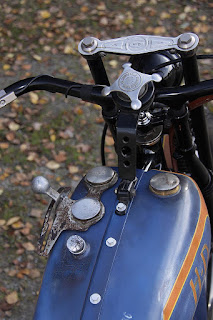 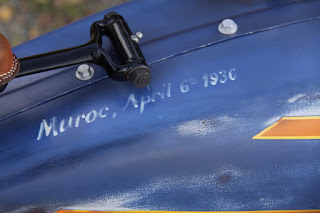 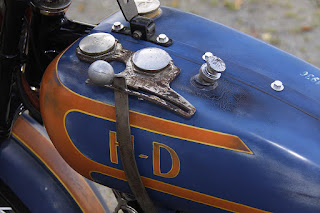 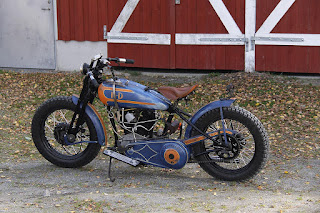 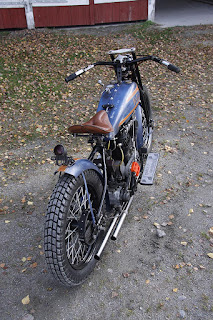 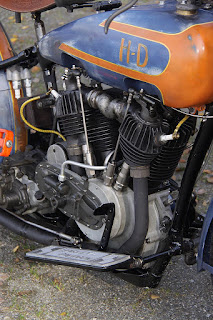 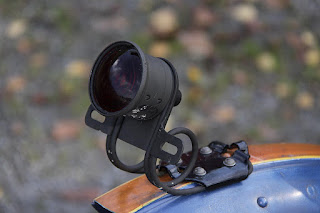 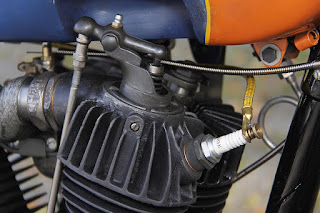