Reading Standards, when did we ever see any of those around amongst those active in the vintage motorcycle scene?
Those mighty dark green sidevalve twins sold a number of bikes in Scandinavia in the late teens and early twenties. This Reading Standard once stayed in the eastern parts of Norway, Akershus where it carried its owner and passengers.

Reading Standard offered their bikes as early as in 1903, twins from 1908 and they continued to make bikes until 1922 when they sold the entire factory to Cleveland motorcycles. They only made the the Raedings Standards for one more year when they had to sell their own factory du to the decline in motorcycle sales. The golden age of motorcycling was by then passed and the markets would never be the same.

I have always liked the Reading Standard sales slogan, "Tested in the Mountains". This as the factory was located in the hills of Pennsylvania. 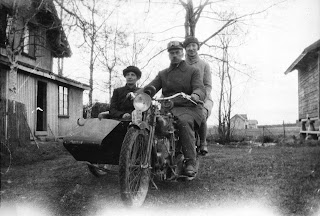