Hans in Holland have more luck than most. At a fair he found an old photo album where the captures below where amongst other photos from whoever once kept his memorys in there.
According to Hans he think those are British motorists touring Belgium on their bikes.
And what bikes those are. Early twenties Harleys and an inline four ACE. Some with periodic artillery wheel caps, and riders all dressed for touring.
What luck those images got rescued by Hans rather than ending at the dumpster place.

I can not resist from posting these pics even if not representing the Scandinavian bike scene from Yesterdaze.

15.08.2011:
My internet friend Jaap in Holland is the lucky owner of a 33 Harley 45". Having seen those pics he could tell us the G registration as shown on the visible reg. plates are from North Holland, most likely Amsterdam. They are some special personal reg. plates that allowed the owner to use them on any vehicle registrated in his name. Eventally the Dutch gov. ended this by the mid fifties.

Oh I wish we had the same, a reg plate to swap between my bikes as I can only drive one at the time anyway. 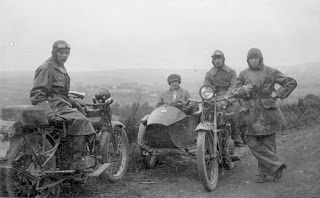 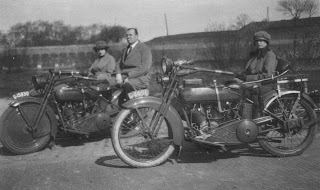 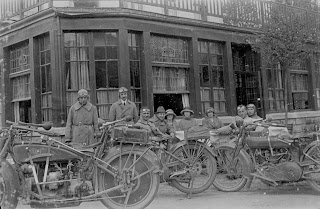 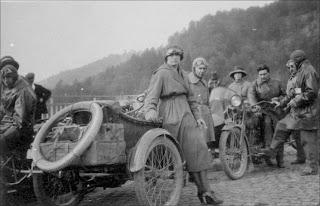