Argh!!!, what a picture this is. There you have Herman Oppen to the left in the picture, well seated on his Henderson De-luxe C-1118. Herman is a guy filled with determination. Just look at him, no kidding this is a go fast guy with an "eat my dust attitude" written in his face.

Then there is the still unknown dandy on his ACE A-1507, looking as cool as a James Dean loong before James was ever born.
Mr. Cools`s ACE is a sport model, look at them wide handlebars they will get your body down when needed.

Whilst Herman have ripped off all parts on his bike causing excess weight Mr. Cool have kept his bike as clean as if it had just left the factory in Philadelphia. Just as clean as his white collared racing jersey.
No grease or oil on this gentleman, girlies watch out your harts will get lost with this fella.

Stay tuned, you will get better known to Herman and C-1118.

27.01.2012:
Digging further into the history of the persons and bikes in this picture reveals I was wrong when naming the Henderson owner in my initial post. This Henderson used to be owned and ridden in road trials such as the Trondhjemsridtet 1921 by Johan Hellum. Hellum a former Norwegian athletics champion would by 1922 or 23 become the Norwegian Henderson general agent for a number of years, an interesting person whom is to be further investegated.
Herman Oppen is the new owner of Henderson De-luxe C-1118, and boy is this Henderson getting a tough life in mr. Oppen`s hands. More to come on Mr. Oppen and C-1118.

06.03.2012: As the amount of information is growing on this spesific picture I now know Mr. cools name is Alf Granheim. Alf competed in many early Norwegian motorcycle races. His favourite bike was the ACE brand. Those magnificent, though fragile fours where sold by Gresvig in Oslo. Hopefully we will get to know more on Mr. Granheim and his ACE`s. 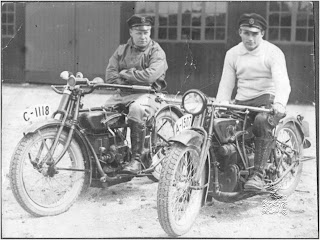