I remember still when the vintage motorcycle hobby was based on overseas phone conversations trough a crackling switchboard, or alternatively you sent a letter waiting for weeks or even months to get a reply from a foreign vendor, you had almost forgotten your own question when getting an answer.

Most of the winter was spent in the cellar completely lonely and quiet whilst trying to restore that old piece of Iron. Only during summer if your homework during winter was crowned with success would you meet fellow gear heads at a rally.

It is not like that anymore, now we have the internet and the blog world, we have to make decisions whether we want to get anything done or stay tuned. Recently finding time to get myself updated on my favorite blogs I didn’t get far. Starting out with Jeff aka Knucklebuster`s blog I soon found myself totally excited by a recent post on his blog.
His post showing a single page from an old Indian News, issue June/July 1932, which he had found in the pile of goodies he hauled back from his hill climber hero Larry Franz Sr.
Jeff how damned cool, I sat there in Wauseon sharing beer with you next to this pile when your van was still not unloaded. 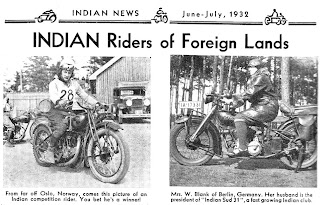 Well, what could excite me on this single page to such an extent? There was a picture sent in from an unnamed Norwegian reader showing him ready to race his OHV Scout. OHV Scout, did they not make them with side valves only, nope they didn’t, no rule without exceptions.
The Wigwam did make a very limited amount of OHV Scouts as well as a number of independent tuners like Andy Koslow, Al Crocker and well known New Zealander Burt Monroe made this as modifications to standard engines, the two first mentioned for sale the third for his own bike.
Andy Koslow is well known for his Excelsior Super X Big-Bertha hillclimbers, Al Crocker for oh well that’s an easy one and Burt Monroe should not get someone to ask themselves what, who or where neither.

OHV valve Scouts are rare as hen`s teeth and priced accordingly. What happened to the Norwegian OHV Scout? Who was the lucky owner roaring the Norwegian dirt tracks in the early thirties on such an interesting piece of American motorcycle history. Why have I never heard of this machine before?

OK, my pulse has fallen back to its normal level of stress and my memory begins to work. Didn’t I read in some old race programs there was a guy competing with what was mentioned as an Indian “special” at several Norwegian races during the early thirties.
Of course, this was Jac. Hansen one of our famous race heroes later to become the main Norwegian Indian importer based in our capitol Oslo.

I spent the next couple of hours refreshing my knowledge on Jac. Hansen by sourcing the information in my files, this was great reading.
Jac. or more correctly Jacob Hansen started his racing career as many early motorcycle racers, on a bicycle. In example he won his class competing at a 30 km`s race in 1920. Racing by leg power would soon be history for Jac. According to my files he seems to have been at the start line at most motorcycle races from 1923 and the next ten years. He competed with an incredible number of motorcycle brands during those events; Harley, Rudge, Nortons, FN, Husquarna, Gillet and finally Indians where we are to be concerned with the “special”.
Jac. surely must have spent time in the US to get his dealership going, maybe he bought the OHV on one of his trips to the Wigwam? 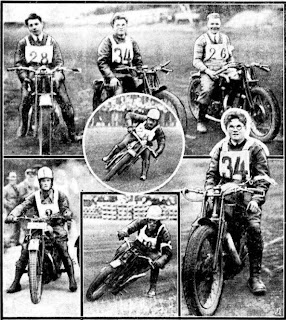 
I look forward to dig more into this Norwegian OHV Scout`s story, in the meantime a couple of links on the subject;

1`st pic show a young Jac. Hansen with his prize after getting a second place in the Std. motorcycle class at the Glostrup Race Track - Denmark back in 1924.

Second pic we see young Jac. (at far right)still at Glostrup in -24 admiring one of the OHV V-twin`s competing in the racing class. This one sported 8 valves and was manufactured in Europe, anyone got a clue??
No wonder he got ambitions to own a real racer himself! 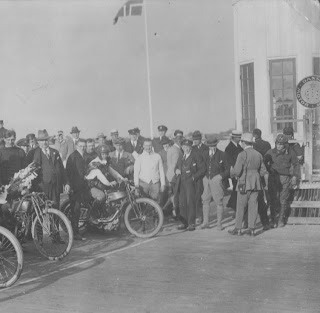