This is the whole picture from where I lent a part to the previous post on Jac. Hansen. Captured in Glostrup Denmark in 1924 we see the handicap match between participating nations in the race; Norway, Sweden, Denmark and Germany. This spesific match was mentioned as the most important and thrilling of all races this weekend by the local newspaper Ekstra Bladet. 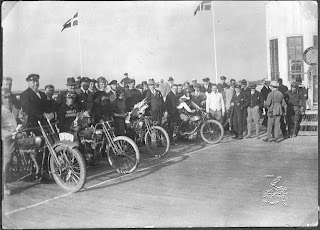 Shown in the picture are from left to right;

Norwegian motorcycle race ace Macke Nicolaysen on Jac. Hansen`s Harley A-2345. Why did Macke chose to ride Jac`s bike rather than his own, A-1503?
I do not know but Jac's bike was most likely faster, after all Jac. did beat Macke in the tourist class race where he crossed the finnish line as second whilst Macke where third. Then on the other hand, why did Macke borrow Jac`s Harley, rather than Herman Oppens Henderson C-1118. After all, Oppen won the tourist class race on his De-luxe. My personal opinion is you need to be familiar with the Henderson to be able to use the potential, Macke neither rode nor raced four`s, not as far as I have found.

Why did not Jac. or Oppen compete in this more prestigeous race? After all they did a first and second in a previous race. I recon this is due to the fact Macke where the senior amongst the three Norwegian riders, he had been at the Fanø races in 1919 as well as he raced at the Glostrup track in 1923.

Number two from left is Swede, "master" Erik Westerberg on a Harley. Erik rides a Harley with a racing keystone frame and a two-cam engine. Erik have not brought his best bike to this event, as we know he had several bikes and owned two eight valve Harley racing motorbikes in his active race career.

Number three from left is Dane, Chr. Walther on an Indian bigvalve racer. He is frequently mentioned in the book written on the Fanø beach races. Chr. Walther was one of the best Danish riders at the time.

Finally number four is German Albert Schuster. His bike is a German made Wanderer OHV 8 valve 750cc racing bike. Albert won the German "Bäderrennen" in the 750 class races in both 1923 & 1924 on this Wanderer.

As said before, this particular race was classed as a "handicap" race. Whilst Walthers & Westerberg both had to start from the starting line, Schuster got 10 sec. and Macke a 5 sec. advance from start. The Danish newspaper EkstraBladet claimed this race to be considered as the highlight of the weekend.
We can only imagine how it felt to be present at the the track when we know the races at Glostrup were totalizator races ala today's horse racing, including beers and booze for the spectators and big money in circulation as there were fierce betting prior to every race. Numbers of spectators at this event exceeded 5000 heads.

It is exciting to know that the odds prior to the race claimed Chr. Walters would win, Westerberg as two, Macke as three and Schuster as fourth to cross the finnish line.

When we know the final result showed Schuster became No. 1, Walther # 2, Westerberg # 3 and finally our own hero Macke fourth, it`s likely to believe some regretted their losses whilst a few have celebrated their profits.

Below is a pic taken in the last moments before start where the drivers get ready. Googles must be no dew, the helmet firmly secured and nerves must be kept under control in order to react quickly at the start signal.
You will see from this photo the drivers location from track center is different than in the photo above, Erik, Macke, Chr. Walthers and Schuster. 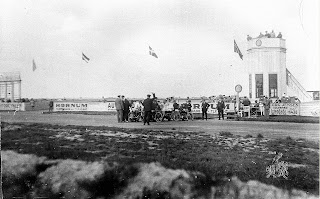