Back in 1923 the International Six Days Trials ISDT was held in Sweden / Norway. SMC (the Swedish Motorcycle Club) was in charge and NMK (Norsk Motorcycle Klub) organized the part of the event that took place in Norway. When the trials where in Norway a speed test up the Korketrekkeren hills was a part of the game.

To be a part of a National team in an ISDT rally was a great challenge for the riders, and to win one of the several competitions during the event was of great honor.

Have been working on a compilation based on the Norwegian ISDT team in 23 for a year now, still finding new pictures from various participants relatives.

Enjoy this great shot taken inside a huge Swedish warehouse where all participants parked their bikes during the night. 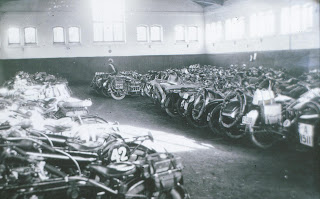 Oh boy there is a bunch of great bikes in this pic.
Lagt inn av American motorcycles kl. 02:28