Herman Oppen is well known by now, as he have been presented on this blog several times on his Henderson motorcycle.
This photo is from an earlier date than those before, here Herman to the right on an ACE he owned for a couple of years. Young Oppen did not have financial worries and was able to own several motorbikes at once, lucky guy.

To the left is his good friend and NMK partner Halvor Lofthus. Halvor ride a Henderson, a brand that he was faithfull to for years and years. Maybe he was the one convincing his young friend Oppen to change to Hendersons? 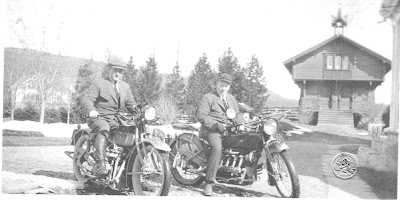