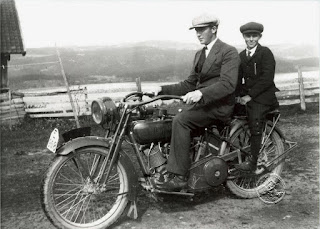 Svein Idar is kind enough to share this great photo with us. It shows Asbjørn Lillehagen on his Harley Davidson model F. Asbjørn lived in the Løten district of Norway, where he in 1920 started a electrical installation firm, no wonder he needed reliable transport to reach his customers in the childhood of electricity in Norway.
Asbjørns son, Svein Idar`s father in law, have told the Harley was ridden with a trailer when used at work. As a child he spent many holiday trips riding this bike tucked in between his father in control and his mother on the pillion pad.
Who knows if this Harley might have survived the people that once had this bike as their pride and joy?
Lagt inn av American motorcycles kl. 10:27