﻿Today most motorbikes are used as pleasure toys, we ride them on a sunny day and park whenever the weather is wet or cold (at least most do).

Not was the scene like this back in the time of yesterdaze motorcycling.

Motorcycles had to work as commercial vehicles, summer and winter. During winter, skis where added either to the side of the bike or the front whell was replaced by one. The variation of ski setup`s for bikes where as many as the number of inventors.

I have since long planned on making an article digging deeper into motorcycle ski setups and those who made them, hmm I need to get some work done on this eventually.
Below are three different photos showing commercial bikes used in the harsh enviroment of the Norwegian winter.   Look at the clothes these guys carry, fur beeing a keyword, and I am quite sure there is Wolf fur used on the gowns worn by the two passengers in the top picture. They are both sales re-presentatives hence they have their own driver. Both the second and the third picture show postal carriages. One is underway to deliver and the other is ready to take of.
No wonder some used the word "workhorses" when talking on their commercially used motorcycle. 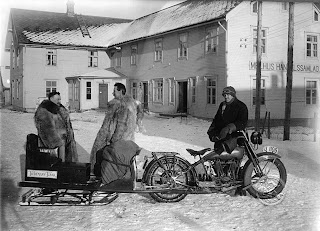 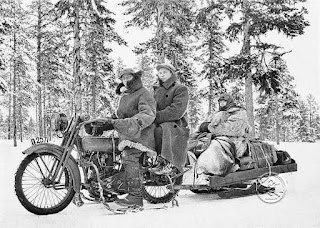 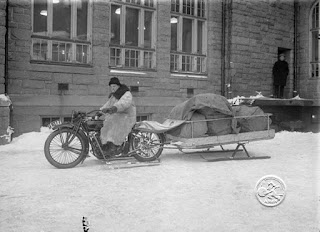