It have been a quiet day at work. Long story short, upgrading a drilling rig in storms in the North sea don't necessarily work out according to plans worked out by engineers in an office!

I`m still kind of in the aftermath of having given ol Bessie back her breath. Still unsure what next project will be, my witt and common sence tells me I should focus on completing one of my since long started and ongoing projects, there are several.
Then there is the itch, you know, for something new, more thrilling, arghh this motorcycle addiction.

Before leaving offshore I finally got the Simms C4 Magneto out of my Henderson, its heading for a full treat at Floberghagens Electromechanic services. I`m really looking forward to ride the old Hen with a bad ass kicking spark, not a dull candle in the combustion after Thomas have had his magic hands on the mag.

On top of this I managed to stay true to a promise I made to my Henderson mentor Rob at O4-Motors, I`m making another windshield bag as I made for Bessie.
I had never been able to fulfill my De-luxe if I didnt get all that free supportive technical assistance from guys with a wealth of knowledge as Rob have. 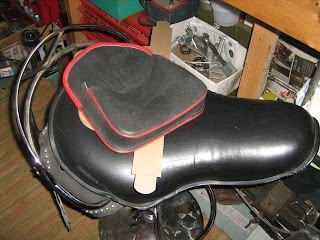 My plan is to play some more with the ZenithTx4 jetting when the spark is OK and get some more power out of the old four, then hopefully get more miles and do at least one rally this year. I am curios about the advertised NVMC rally, Ørneridtet av 1915 (the rally is in english named the eagle (ørn) rally from the name of an early bicycle club carrying the same name).
The Ørn bicycle club, as other bicycle clubs at the turn of the last century would be the natural clubs to join by the early motorcycle riders, as early motorcycle racers mostly had a previous career in bicycle races.
This rally will be held partially on gravel roads normally not open for traffic, roads that have stayed the same since the days when they where used by Hendersons, Injuns and alike.
Will try to post more info on this whenever this gets available.

I have previously tried to write some historical information on the early years of NMK (Norsk Motorcycle club) that was founded in 1916.
There is little motorcycle history known from Norway prior to the NMK foundation, other than the Ørneridtet in 1915, a race held at a horce track in Drammen the same year, an accident at the same track took place in 1915 too. Then of course there is Macke Nicolaysen`s (well known from this blog in previous posts) and his mate Ragnvald Gundersen`s "world famous" crossing the Krokkleiven pass. The Krokkleiven crossing I`m quite sure took place in early 1916 prior to the NMK foundation.
Krokkleiven is a pass on a road as old as from the time when pilgrims walked from our capitol Oslo to the Nidaros dome in Trondheim.
No motorised vehicle had managed to cross here before Macke on his Indian Power Plus and Ragnvald on his Harley did so, congratulations to the two brave men from me, nearly a century later. 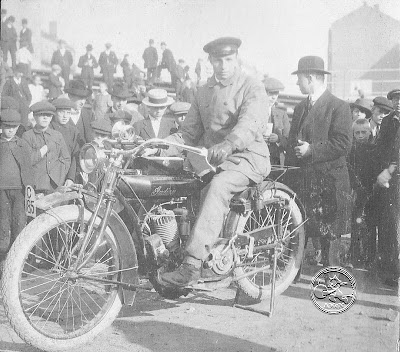 Hesselberg-Meyer at the start line in Ørns ridt in 1916 on his brand new Indian C-185. 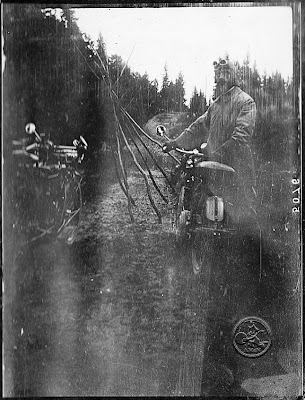 Ragnvald Gundersen at rest with his Harley 1916 on his way trough the Kroksgogen (Krok woods) soon to enter the Krokkleivene pass. Next to Gundersens Harley is Macke`s Indian 1916 that he got as a gift from his mother (more on that later).
Whatever is placed in the middle of the road I`m not sure??
Note, back in 1915/16 motorcycles had only front mounted reg plates in Norway, a bunh of speed riding complaints in a short time soon gave reg plates at both front and rear. Reg plates at rear makes the process of taking a note of reg number far easier when a bike passes at speeds above 30 miles pr hour!
Lagt inn av American motorcycles kl. 10:26