There is still stuff waiting to be found

I was a few years ago litterally "out in the bush" looking for some Henderson parts at this farm in the end of a gravel road, several miles to any neighbour. A older lady and her two sons lived there. I had learned that my own Henderson had been owned by the farmer here just after WWII.
Holy gosh, their huge barn was packed, literally packed with cars and some motorcycle stuff. Here was plenty of "you newer know" and "rather keep just in case". I got to talk to the old lady, and as always I had my little dog with me (pocket psycology, a dog is an ice breaker with most people) and she loved him. We walked trough the barn for hours and I found many Henderson parts, even some that had belonged to my bike that had left the farm more than 50 years earlier.

Well, there is more to it still. After having been in the attic of the house finding the original mot papers once belonging to my bike and several photos from late forties(need to get them scanned) her son said; Mom what about the old engine in the back of the inspection grave? My hart started beating, again. Off we went, down in the grave removing stuff and there it was. A home made compressor, a riveted tank from some steam train or vessel and on top a POPE 1000cc v-TWIN OHV motor pumping air. That it was a POPE to be honest I wouldnt have known if it was not cast in the facing cranckcase. That is as close as I have ever been getting a hartattack caused by old motorcycle stuff.
Long story short I convinced them to sell it to me (I had to buy the tank too), had it for some yars until I let it go to a German that had the finances required to get that back to beeing a bike again.

Moral:
there is still stuff out there, but one have to dig to find it. 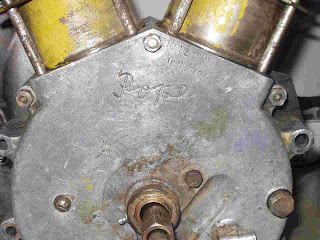 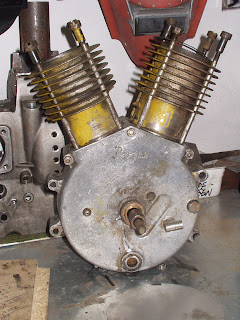 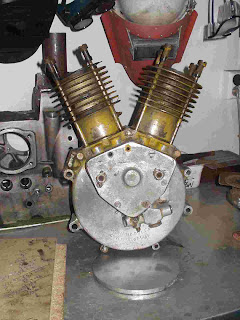