This pic is of rather low quality, tough most likely its taken by a box-camera and hence not to bad after all.
The box camera is just as it says, a box with a roll of film and a shutter. No-nonsens such as optics or electronics or anything alike. This camera type was what you could expect the average guy (or girl) to own pre WWII. 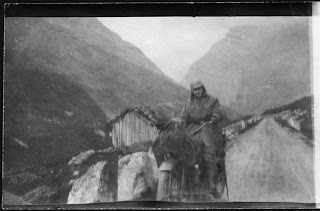 Oh well, this is Jens`s
grand-
mother Fanny as young lady. Pic is taken in 1922 according to what Jens knows of its history.
Jens is restoring two old Harleys, a 1923 and a 1928 (previously pictured under "as found").
Lagt inn av American motorcycles kl. 10:27