From what I remeber i bought my first old Harley back in the late eighties, 88 or 89 and since there havent been any cure working to let this interrest go. I hadnt heard of the "board track" racing era until when working in TX during the early ninties I came across a copy of Stephen Wrights amazing book,
"the American Racer 1900 - 1940". Whow, this book is a must have. Large and heavy with huge format pictures letting the reader get an excelent view of the details in the pictures.

Later on the board track racing history published by Statnekov on the internet added to the inspiration and interrest (link further down this post) in this sport.

During the last couple of years an overwhelming amount of pictures and even films from this great sport have surfaced as many libraries and other institutions have digitalized their material. Its just a question of searching, one will find :-) 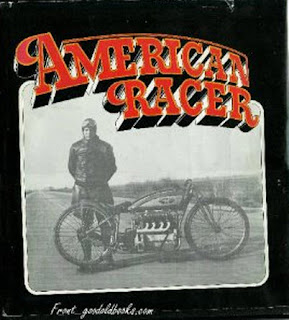 This book have been out of print for years, but a second edition is now availiable trough;
http://www.americanmotorcyclebook.com/
It`s a must to own. 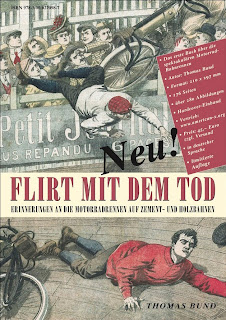 As soon as I learned Thomas Bund, from wich I previously had bought the excelent American-X book - had released a new book on board track racers I placed an order with him.
It is just fantastic too, and one can learn a lot from the european board track racing scene as well as there is unseen footage from the US.
This book was printed in 300 copies only, maybe there are still some left?
If so it`s availiable trough; http://american-x.org/ 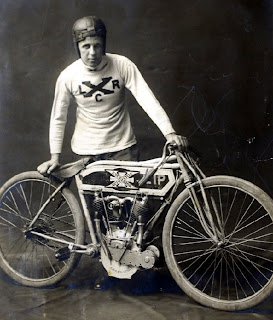 This is an early Excelsior boardtrack racer, it looks so fragile that it sounds unreal those motors where wound up to speeds exceeding 100 mph. 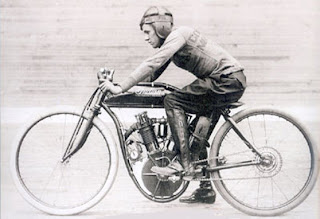 Imagine 100 mph on a slippery wooden surface with no brakes, suspension and not even a throttle. Just a cut out switch to kill your magneto whenever the finnish line is passed. 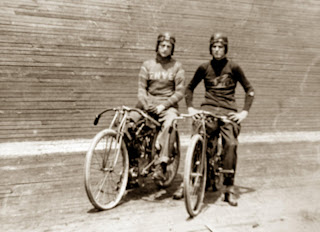 An early Indian racer at right, wich is easily recognizeable with its handlebars built in three parts. An Excelsior to the left with a Merkel fork up front (Flying Merkel). 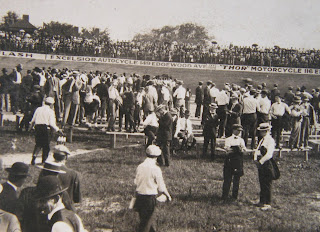 There where plenty of room for the spectators inside the racing circuit where there allso used to be locations for the various teams competing. 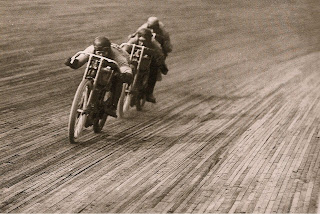 Said this before, imagine stretching out your motor at full throttle (if you ever had one) passing 100mph on a track made of 2" by 4"`s (they where placed upright such as the 2" part was making the track surface), all slippery as the motors have total loss lubrication and if you go down you will get splinters all over from the track. This men where daredevils for sure. 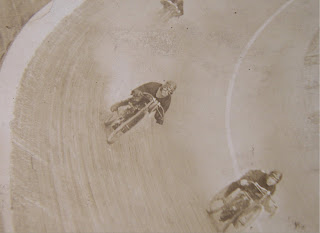 Bankings trough the curves could go 60 degrees steep, no way you could get up this wall if you released your speed any. 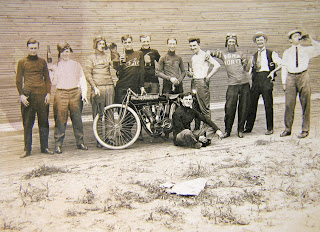 Celebrating with booze and beer. Survived, maybe even got a part of the price money. These guys all raced for hard cash. If you won there could be high money involved. But then as now, "what easy comes easy goes" 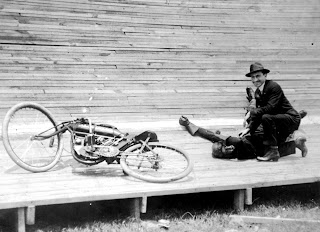 This image show the back side of the medal, getting into a slide, maybe run over and surely full of splinters. 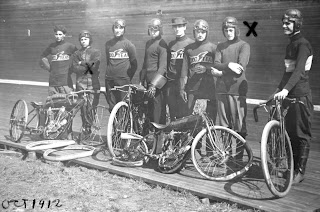 This group of Indian racers seem to have been trough a tough day at the track.

This is the only video I know where the bike presented is a 100% true original racer as 99% of the racers seen today are excellent replicas of yesterdaze racers.

Make sure your volume is crancked up to HIGH to give yourself an idea what this motor sounds like. Imagine trying to control this beast on slippery planks at 100mph.


These are some cool links for more pictures and information on the boardtrack racing history, just click on the link to get there;

http://www.motorcyclecannonball.com/
Check out the forum, pre 1916 motorcycles and you will find more photos on early racers.

http://www.oldironrider.com/VIDEOS.html
Here are some videos from old (and modern) boardtrack racers in action

OK, we never had any boardtracks in Norway as we was a poor country back then. Our neighbours in Sweden had one in a town Hornsberg. 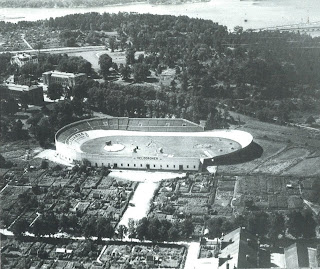 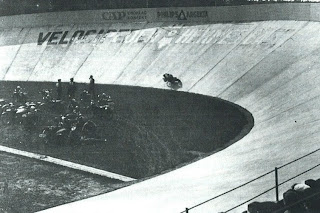 The Hornsberg track was made of concrete.

Did we race with American motorcyles back then in Norway? Yes indeed we raced on ice, on the streets, up hills or on horse race tracks. But this is all another yet untold story.
Lagt inn av American motorcycles kl. 08:01