A couple of days ago I got an e-mail that I truly apprechiated. This was from a Swedish lady, Myrna. She wanted to share some photos of her Grandfather Gunnars Harley with me as well as she gave me a brief look into whom these folks in the photos where.
This early twenties IOE Harley belonged to Myrnas grandfather whom she never learned to know as he passed only 32 years young back in 1930.
Gunnar living in Gislaved used his Harley both as daily transport as well as it played a role in his bussiness making furniture.
A sidecar equipped Harley was what he needed to get that piece of furniture securely delivered to any customer.
Both pics below are dated from 1929, the children is Olle who later was to become Myrnas father, his sister Gunnel and brother Allan.
The lady beeing Gunnars wife Gerda, Myrnas grandmother.
Having said Myrna is Swede is not all true as her mother flied Norway at the age 18 during WWII ending up in Sweden on the back of Olles motorcycle!! 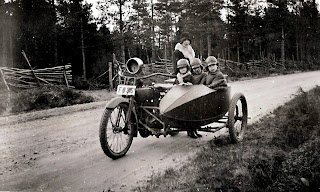 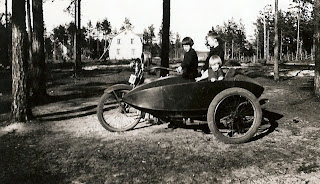 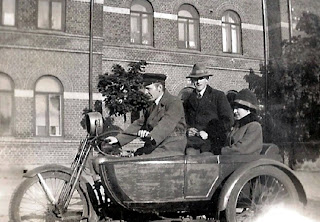 A picture showing Gunnar with wife in the sidecar, pillow passenger is unknown. This picture show another sidecar boot than the two previous. 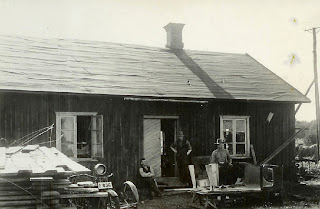 This pic is taken in front of Gunnars furniture bussines. The Harleys sidecar boot is removed to transport furniture.


These pictures have given a brief look into peoples lifes who all since long have passed. Wonder what happened to F 836, it might still be around.

Thanks a lot Myrna for sharing, wish there where more people like yourself.
Lagt inn av American motorcycles kl. 15:13