In 1916 a group of men came together and founded Norways first Motorcycle club, " Norsk Motorcykel Club ". Sverre Strand was directed as the organisations first chairman, the other 6 founders and members of the board as well as the club where: Halvor Haneborg, Finn Hjortnæs, Tycko Lindros, Macke Nicolaysen, Sverre Nærup og Poul de Roger. 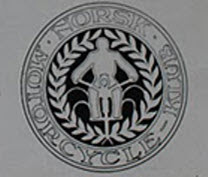 This is a pretty crappy picture of the first Norsk Motorcykle Klub NMK logo, I find the design very cool.


Most of those beeing a member of NMK in these early years where engineers, business managers, wholesalers and in general people from the upper class.

In the early years of the organisation reliability trials where held on public roads, like from one town to another and back. Most of the focus was getting the bike to take the beating of the country roads to get you home.

After the WWI NMK arranged the famous Kristianaia-Trondhjem-Kristiania trial, arranged for the first time 29-31 of August 1919. This was a distance of more than 1000km, an unheard distance back then.

The above scan is from "Norsk Idretts og Sports Blad" covering up the facts on this spectacular event.

17 drivers participated in this first Kristiania-Trondhjem and back trial, 16 Norwegians and one Danish driver. The weather was really bad when crossing the mountains and soon close to half of the participants where out due to technical problems. The remaining ten where true heroes. Events winner was Erik Gotaas at 398 points, second was Oscar Wiger 403 points and third pr. Bjørnstad at 465 points. The Danish participant riding a small BSA crossed the finnish line at 1035 points.

Erik Gotaas who drove his Excelsior celebrated his 20 years birthday at the day of finnishing the trial, a brave youg man compared to his older and more experienced competitors.
Other bikes finnishing where Indians, Harleys and a Reading Standard

On the 7 of desember 1920 "Norsk Motorcykle Klub Kristiania" (now Oslo) was founded as a branch of the existing organisation.
In just a year the club had 288 members, all recomended by a previous member and approved by the club board.


The club arranged several races, one of the first was the "Korketrekkeren race" or in english "the corckscrew race" This was an uphill race from Svendstuen to Frognerseteren, loads of curves rising 250 meters from start to the finnish line.
The first Korketrekkeren was arranged 22 of october 1921, when Macke Nicolaysen NMK Kristiania set a time record of 2.59 1/5. 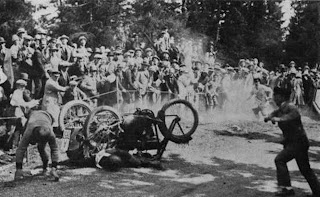 The picture above is from a race held in 1927 where driver Torbjørn Tollefsen lost control of his Harley outfit coming out of a sharp S curve, throwing his chair monkey Fr. Dieseth out of the chair. This rather spectacular scene resulted in an injured driver and an unhurt monkey. I bet the spectators where pretty shaken by this accident!

Other races still remembered where held at locations nearby Oslo such as Dælenga, Bjerke Travbane, Frogner Stadion, Frognerkilen and Gjerssjøen where the two last where during winter time on ice as they are both lakes. 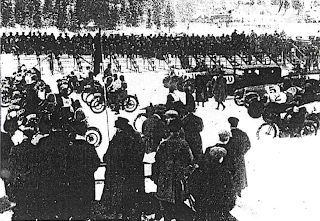 This picture is taken during a race on the ice of Gjersjøen.

In a few years NMK was getting branches in other major cities too, such as Bergen and Trondhjem.
Lagt inn av American motorcycles kl. 21:39