Those still remebering my write up on the great Danish motorcyclist Christian Bohnstedt-Pedersen will remeber he did some spectacular racing with Reading Standards on the Fanø Races held on the Fanø beaches from 1919 to 1924.

Here is some more photos of Christian and his Reading Standard machines taken on the Fanø beaches.
Who might this brave sidecar girl be? 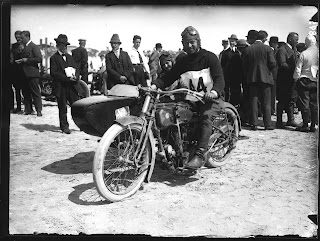 1921 at the Fanø beach race. Standard bike with sidecar, humm well not quite standard is it with those roadster bars?
I like the handlebar risers used by Reading Standard, like those to come from Flanders years later.

UPDATED INFO, 27.11.2010:
Spoke with Christian Bohnstedt-Petersen`s grandson Frank who could inform that the brave woman in the Reading Standards sidecar was his grandmother Vera. At the time of the race when this photo is captured Franks father Henry was a lad aged 6. Wonder if he was on the beach looking at his parents? 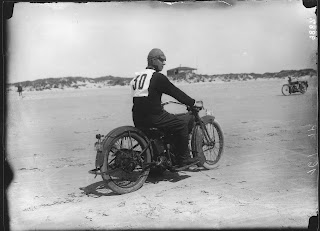 1921 at the Fanø beach race. Testing the performance of a standard bike. 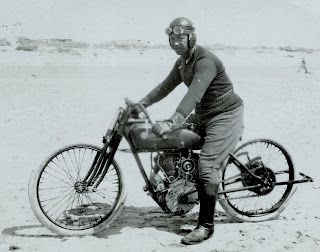 1920 at the Fanø beach race. This is a serious racing machine, direct drive, no gear or clutch, just "off you go".
Both cylinders have cooling ribs removed and holes drilled in the cylinder walls to improve cooling and get rid of waste oil.
Frame have been modified with keystone style front motor mount as well as the entire frame is shorted.
Lagt inn av American motorcycles kl. 18:14