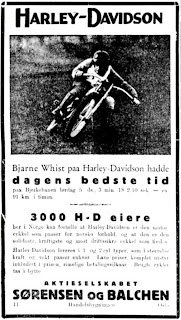 I have in previous posts stated Harley Davidson was the number one chose of motorcycles availiable during the late teens, through the twenties and into the early thirties.
How many Harleys was sold in these years? We will never find out for sure as private actors imported and sold bikes, new and used, with or without warranty then as today.
What we do know, is that by mid October 1929 the official sales by Sørensen & Balchen whom was the official general agent passed 3000 bikes.

This must have caused an official celebration at S&B, as well as they posted an special ad to chosen newspapers to brag the Harley superiority.

Whom was chosen to represent Harley in their ad, none other than Bjarne Whist and his keystone framed racer wich we know from a previous post on this blog.

As stated by S&B in 1929;
Harley Davidson, none more solid, powerful and reliable, as made for Norwegian roads.