In some ways I would have liked Norway not being such a long country with people living scattered around . Tom lives in the middle of Norway, me all the way down south. That is a looong way to go for a meet and an evening spin. If we had lived in, lets say Denmark, we could meet in the middle and enjoy a ride to go home for a late supper.
Anyway and anyhow, Toms ride is a beautiful Harley 45" that started (according to Tom) as a WWII WL but shortley after Normandie rebuilt to be sold as a sivilian bike as early as in 1946. This is a bike brought back to life by NOS and more NOS or used original parts. What`s even better, its a daily rider trough the summer season, either with a solo saddle or a buddy seat to bring someone along for a ride. Tom, you can look forward to next summers rides, thats what a 45" is made for, to be used. 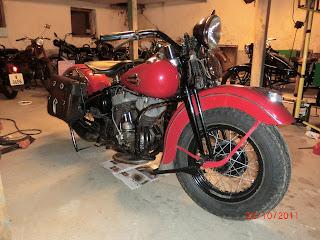 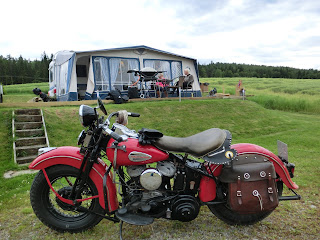