Bjarne Fosskaug, once a Norwegian motorcycle hero earned his reputation as a race ace during the late twenties and early thirties.

Bjarne truly favoured Harley Davidson motorcycles and this was not limited to race tracks. He was a keen motorcyclist who enjoyed touring cross country on his rock solid Harley Davidson JD with sidecar. Those travels gave him and his bike thousands of miles on Norwegian country roads, their quality in these days were worse than bad.
Imagination is needed to tell the amount of stress the mecanical parts on this bike have gone trough.


The photo below is taken during one of Bjarnes tours to the fjords, here resting whilst riding the countless s curves down the mountain side to the Geiranger fjord. This particular road is one of my personal favs. when riding in the western parts of Norway. The road is still single lane laid on the same track as where Bjarne once rode his JD, and there are still tall cliffs on the outside of most curves. Now though, there are continous auto gard rails along the road where Bjarne had just a number of curb stones every now and then.
I have personal experience with Harleys early coaster brakes, lack of braking force is evident, to say the least.
I bet the Raybestos brake bands had a hard time and a rest was needed to cool them. 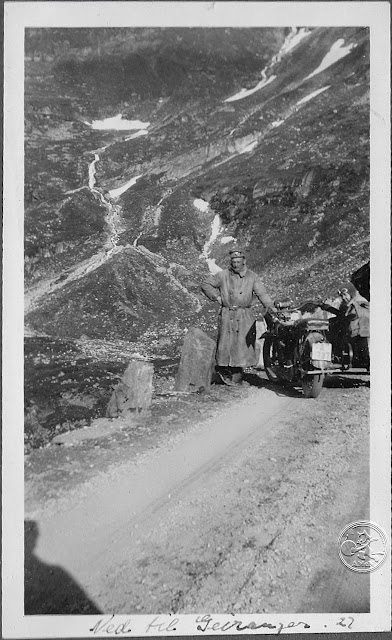