When I look back trough my previous posts in "pics from yesterdaze" I find photos of guys like Macke Nicolaysen, Herman Oppen, Johan Hellum and Bjarne Wist.

Apart from playing a major role in the Norwegian motorcycle race scene during the twenties, they all have in common to have participated in what was then considered as the major motorcycling event; "Trondhjemsridtet".
This was a race on ordinary roads from Norways capitol Oslo (then named Kristiania) across the mountains separating south and east from north, to Trondhjem and back.
A race covering more than 1000km`s, roads barely better than a mountain trecking route, and imagine this was all done in three days, what brave men (and women, we will eventually get back to that).

A dedicated group of NVMC members have decided to bring this great event back to life as a vintage motorcycle rally, for those daring to use their antique machinery like as they where intended to.

Check out the "Trondhjemsridtet" homepage and learn more on this promising event.

Below a photo from the 1922 event, showing Herman Oppen entering Trondhjem town center on his Henderson.

I hope to ever be able to join this rally whit my Henderson as Herman Oppen did. 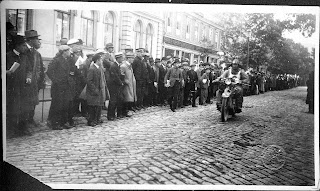