Old, but still young at heart

You might remember my presentation on Henderson restoration held at a local vintage motor club AMK? Last Sunday I got a very interesting phone call that in itself was more valuable than any pay for the above services for AMK. I dont know the history of my Henderon any further back than the last guy whom owned it as a registered bike. This is back in 1949-50, and as this guy was since long passed I had never been able to track down any older history, the local registry neither had any paper work in their archives (they are, hmm I shouldnt swear in public). OK, back to last Sunday`s phone call, a fella telling me he called on behalf of his father who claimed to have ridden my Henderson from 1947 to 1950, three summers filled with tours, fishing and camping all over southern Norway. Then unfortunately the engine had broken and he sold it off as a parts bike to the guy that I knew had owned it. I allready knew the later had used the engine from another Henderson he had crashed in 1949 for my bike. Now I was asked if he could bring his father to see the bike he had once loved as he had never ever thought it had survived all those years until my Henderson lecture had been mentioned to them. I promise you the visit was great fun both for me and the old gentleman that had once owned my Henderson, even if his body was not as stron as in his youth his mind was as sharp as a knive and his memory as well. He told me loads of great stories from when he and a friend toured the gravel roads of southern Norway on a bike that noone could follow. Histories from way back, still told as if they happened yesterday. Believe it or not, I was even told the guy selling the Henderson to my new acquaintance back in 47 was still allive too, holy moly!! This story is for sure not come to an end still, stay tuned. 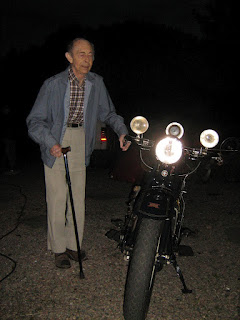