A journey to the happy land!

A while back I came across in a Norwegian newspaper, dated 1923 - this very poetic Harley Davidson advert.
This is an early example of the factory`s need to change the Harley Davidson`s image from only being a work horse, to a tool for both work and joyful pleasure rides.

Below the actual clipping I have tried to translate the rather old fashioned language to modern english, hard but I`m quite pleased myself. 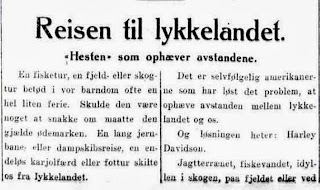 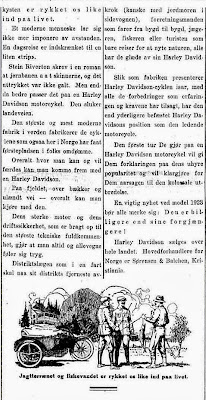 A travel to the happy land.
"The horse that is not afraid of long distances"

A fishing trip, a mountain hike - or forest hike, in our childhood this meant an entire vacation. Should a trip be something to brag about, it had to go to the wilderness. A long trip by train, a travel by steam ship, a never-ending travel by buggy and horse or a hike separated us from the happy land.

It is of course the Americans who have solved the problem for us with the long distances between ourselves and the happy land.

And the solution to the problem?, its name is: Harley Davidson.

Hunting grounds, fishing lakes, woodland`s, the mountains or the beaches of the coast have all come close.
A modern man cannot longer be impressed by distances. A day trip is now only to be considered as "just a little trip".
The Norwegian author Stein Riverton wrote in a novel; "A steam train eats its tracks". That is one good expression.

But the term fits better for a Harley Davidson.
It devours the road!

The largest and most modern factory in the world, produce the bikes that in the entire world have received first place in people's reputation. Everywhere you can and will travel, you can come on a Harley Davidson.
In the mountains, across rivers and on the rugged road - you can run with a Harley anywhere. Its powerful engine and its operational safety, which is brought up to technical perfection, makes sure you always and everywhere will feel safe.

The doctor in a hurry to reach a patient far off (perhaps with the midwife in the sidecar), a business man who travel from village to village, the hunter, a fisherman or a tourist who only travels to enjoy nature itself. They all enjoy the pleasure of a Harley Davidson.

This year`s Harley Davidson models as presented by the factory, with all the improvements their experience have given, Harley Davidson has further consolidated its position as the leading motorcycle manufacturer.

Your first trip with a Harley Davidson motorcycle, will explain to you why a Harley deserves such great popularity, and will make you understand why it sells in such great numbers.

An important issue with the 1923 models that everyone should note:
They are cheaper than their predecessors!

Harley Davidson is sold all across the country. Main sales representative for Norway: