Be damned,
I have voluntarily put my name on the list of participants for next years Trondhjemsridtet. A 1170 km`s ride on mostly back roads and gravel, as back in 1919 when this rally was first held.

In 1919 a ride from our capitol Kristiania to Trondhjem and back was a unheard of challenge. I will start planning with the purpose in mind to complete this trip on my Henderson De-luxe, alternatively I have a Harley or two to use, but to ride a bike  from the twenties would bring back the spirit of my hero, Herman Oppen who rode his Hendersons in this event at several occasions.

Check out the official home page of the Trondhjemsridtet 1919!

Trondhjems rittet 1919 will ascend into Rondane, a national park, on a road that today is a national heritage. This road is one of 18 roads that have this title. They are all close to perfect motorcycle roads, narrow and with lots of winding curves.

Below is a picture taken by Herman Oppen from the saddle on his Henderson when touring Rondane back in 1922. 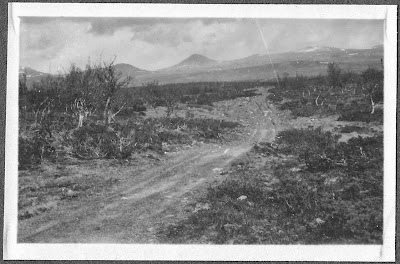