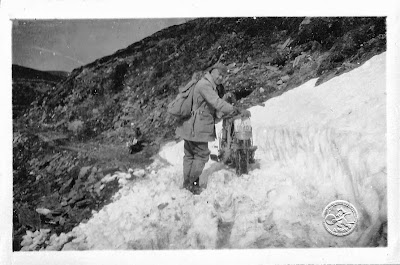 This is Halvor Lofthus crossing a snowdrift with his Henderson during practice for the great Norwegian mountain rally back in 1923. Those guys were brave men when crossing the Norwegian mountains, on roads still frequented mostly by horses.

On this trip Halvor Lofthus rode with his team mate and best friend Herman Oppen. When resting on a mountain meadow they were approached  by an old lady out to herd her sheeps. She had never seen a motorcycle before, in 1923!
Imagine that.