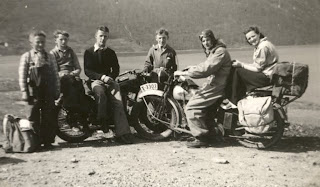 This picture is from the Northern part of Norway, the Troms region. The Harley, a 45" (750cc) from the mid thirties seems to be off further from home than the other motorcyclist as it is well packed on both sides at rear as well as on the luggage rack.
The Harley driver is a pretty young fella. I bet those three younger lads wouldnt mind having the Harley and for sure the girl dont seem like she would be hard to ask coming along as a pillow passenger neither.
Its real hard to see what bike is next to the Harley, but my guess is a early thirties English brand bike as its fuel tank mounted instrument consolle typical for the that period.

10.01.2011:
Hrrm, I need to clean my glasses from now on when looking at the old photos. Got an e-mail this morning from Jaap in Holland correcting me that this Harley is not a 45" but a 34" (500cc) model CB from 1934. I agree, the 34"`s didnt sport valanced fenders as the 45"`s did (well that is for sure not always the truth as I`ve seen some 34"`s with valanced front mudguard). Year of manufacture is for sure 1934 based on tank decals and white rubber grips on the handlebars.
Well thanks a lot Jaap :-)
Lagt inn av American motorcycles kl. 20:35