Coincidences, life is full of those.
While surfing the endless ocean of the www I came across a genealogy site belonging to Tommy. Tommy had dedicated a page on his site to his since long passed father Harry (1914 – 1976) and some pictures where shown with Harry astride his Harley Davidson.
Sending Tommy an e-mail explaining my interest in motorcycle history soon paid off. Our correspondence revealed Tommy as a true gentleman being very keen on letting me know more on his father and his life with motorcycles, generously sharing stories he remembered his father had told him as well as what he had experienced from his childhood when being a part of his family motorcycle life. Tommy did also climb his attic finding his mothers old photo album containing more photos of great interest to me and you, thanks a lot Tommy for sharing.

Harry started his motorcycle career as a young lad, but this could soon have been put to an end as a car crashed into him damaging his leg such that it would never again be healed. Harry did not let this prevent him from riding tough, not at all. When still at the hospital he was visited by a motorcycle friend Stig who drove his Harley to get there. Harry asked if he could please sit on his bike which Stig agreed on. When seated on the bike Harry could not resist and took the bike for a spin, damaged leg or not, he couldn’t wait getting back in the saddle. Harrys first bikes where British made but he where soon to fell deeply in love with Harley Davidsons of far greater displacement than their tiny British cousins. Later on with exception of a short fling with an Indian he would stay with Harleys. Tommy could tell me Harry had at least 12 motorbikes along the years. 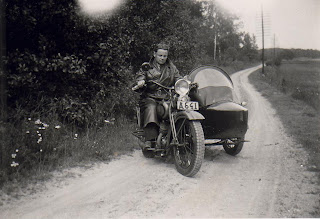 
Harry grew up in “Hesthagen” (Horse field) in Nacka, a small community not far from Stockholm the capitol of Sweden. Here he was soon nicknamed “hestehags skrecken” or in English “The Horse field horror” as the locals where scared when he and mate Stig roared by on their Harleys, throttles wide open and the sound of the V-twins popping in their ears.
One story tells that Harry was out speeding on the local roads on a snappy Harley he had bought second hand at a police auction, Stig riding with as pillion rider this time. This was late night and speed was far higher than the limits allowed for. All off a sudden there where sirens coming up behind, this from a local police officer running a Harley too. Harry kept throttle wide open trough a number of curves and when the police officers headlight was visible no more turned a sudden left. This led those two daredevils into a farmer road where they turned of the bike and lights keeping calm until the police bike drove by dissapearing.

Harry started up working with Ostermans in Stockholm as a mechanic. According to Tommy they imported Harleys directly from the US, delivered from the factory in huge wooden boxes. Harry and others had access to the left over materials from the boxes when bikes where removed. Those materials where very popular amongst those extending their holiday homes, or some would even end up used when building a smaller cottage.
Wouldn’t that be something, staying trough summer in a cottage built by planks from Harley boxes shipped out of “the Factory” in Milwaukee? 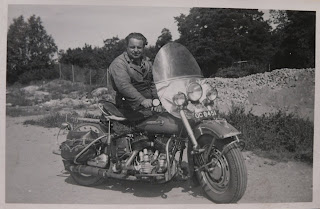 Harry with a UL imported as a second hand machine from the US. This bike is packed with optional extras, front & rear bumper, hub caps, fender trims, bullet lights, jewels, front fender light and what is most interesting the additional hydraulic front fork dampers. This cool detail is described as a special option used by guys in the Jersey area, see Knuckle Busters blog;
http://knucklebuster1939.blogspot.com/2010/10/george-miller-collection.html
This bike must have been quite impressing compared with most others mounts when Harry arrived at any scene.

Later on in 1949 Harry started his own workshop VEGA CYKEL OG MOTORSERVICE where he took care of a growing number of customers in need of his mechanic skills. He stayed in business there for 27 years until his death in 1976. The need of a skilled Harley mechanic didn’t get to an end even if there became less of these motors in everyday use. Older chaps brought their Harleys still to get helped well into the late sixties / early seventies. 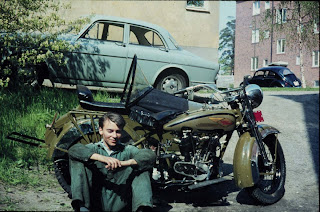 A younger Tommy giving Harry a helping hand with a customers Harley JD outfit. This bike have at some point in its life got a major facelift, fringed saddle, chrome fender skirts, huge car light and tank decals from a thirties VL..

Harry and his friends Harleys where not just everyday rides to get to work. Tommy grew up getting used to the entire family leaving home on a Sunday morning to have a ride trough the surrounding country side, picnics included. When riding, the normal setup would be mother and Tommy in the sidecar and brother Leif on the back of the buddy seat. Leif would be secured to dad with a belt, this as he had the habit of falling a sleep during longer rides. 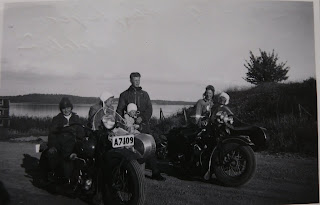 Harry and family bike in the background with wife and Tommy in the sidecar. Leif is ready to take of with a friends bike, A 7109. 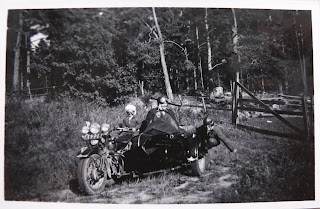 Tommy at the back of the buddy seat, Leif must have got influenced by his uncle as he pretends to be a racing sidecar monkey hanging out of the car. 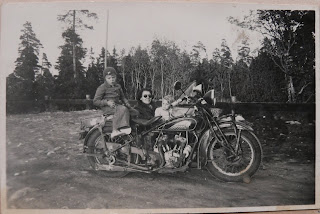 The Indian fling, Leif on the passenger saddle, mother and Tommy in the sidecar. 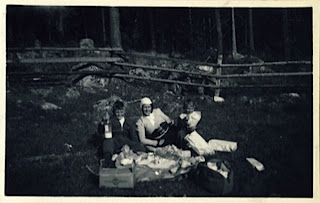 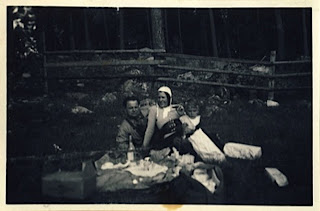 This is what a Sunday is made for, motor biking in great weather and a picnic rest with all sorts of goodies.


In addition to touring his bikes and working with motorbikes in his workshop, Harry would top this up helping out as a mechanic when his friends raced in local events, such as in Albybacken hill climb. Several Harleys used to compete in these events and Tommys uncle, Gunnar acted as sidecar monkey in friend Hasse Olsson`s Harley outfit. Hasse, as well as others competing in those races used their bikes in ordinary traffic too. 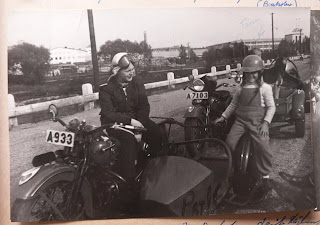 Hasses sidecar is cut down and modified with a bar for the sidecar monkey to keep secured to when doing his acrobatics in a race.
Leif, Tommys brother sits on the sidecar wheel of Hasses Hog. A Harley with a commercial sidecar for hauling goods is part of the crew. At the rear is Harry`s family mount. On cool detail is there is a dog coming along, standing in the commercial sidecar. Who would mind “walking the dog ” this way? 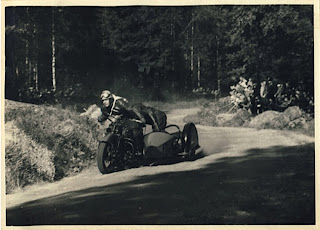 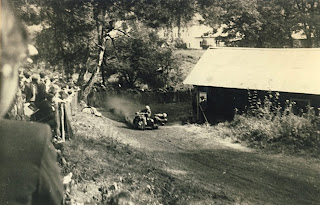 This mount is Gunnar Andersons 47 Knuckle 61” (1000cc). Check out the amount of gravel thrown by the rear wheel towards the spectators trying to hide behind the fence. The Knuckle power must have been something to “work out with” up this hill.
In 1955 Harry bought his first car, a DKW van. What a step down most of us would say today, compared to a big inch Harley Davidson, but times have changed.