A while back, pooking around in in a box marked "Harley JD and related" in my "office" a cool photo surfaced. This photo tell a lot of stories to me even if I never got the chance to be in this garage myself.
It is taken inside John Cameron`s garage at his place in SOCAL where he lived.

But, I did call and talk to John Cameron before he passed, and I have this and a couple more photos from inside this his garage that I have been given, wich is cool as he is one of my "old motorcycle heroes".

His skills with the older J-era Harleys and the JDH two-cammers as well as owning the 8 valve Harley racing engine that first belonged to the british racing-hero Feddy Dixon should be well known for many. This and the fact he was one of the original founders of the Boozefighters, a club well known for taking part in the Hollister rave. When Life Magazine made their story "covering" the event they played a role in giving birth to what eventually became the 1% Biker culture.

I became aware of Johns name after having purchased the unvaluable book "Inside Harley Davidson 1903 to 1945" where he shared a lot of his knowledge. At this time, having just started on my first JD I learned a lot from reading this book. 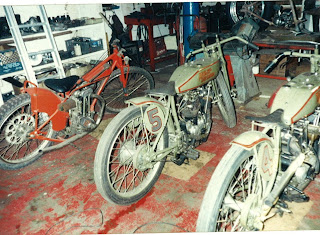 At far right in the picture is Johns 8 valve board track racer, in the middle a two-cammer in a boardtrack racing frame and to the left a JAP engined speedway bike.
On the work bench is most likely another one of Johns many bobbed two-cammers or what is more correctly named "Cut downs", the predecessor of the bobber beeing borned.

This is what "Inside Harley Davidson 1903-45" looks like. If you ever get the chance to find one, buy it. 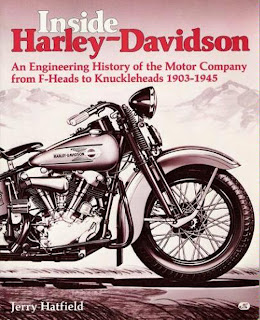 To give further insight in the "Cut Downs" made by JD John Cameron, check out this link:
http://www.harley-memories.com/bobber.html