Its a new year, 2011. Lets hope this year will make all your (and mine) motorcycle dreams come trough.
I passed 50k individual hits on my blog during 2010, whow to say the least. Not to bad at all, presenting thoughts and photos on this rather narrow lane interest wich old US made bikes and related after all is for the "average Joe".

December have been a pretty awful month, coooold several times hitting -28 below (we are talking celsius). Most of the day have been spent in front of the owen continously feeding logs into the fire.

Wrenching in a workshop when there is less than 5 degree C is not inspiring at all.
Well, there is still e-bay and hunting for "the parts", now consentrating on whatever is Panhead related.

Will get back to blog mode starting whit sharing another cool photo from the "yesterdaze" motorcycle scene.
This is a Dane, P.Chr. Herl getting aerodynamic on his big port Exelscior racer at Fanø beach in 1923. He must have read the chapter in Victor W. Paiges book on how aerodynamics affect the speed and what is the ideal "go fast position". 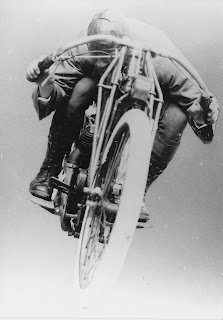 A cool detail that I have mentioned before are the mechanical controls for ignition and throtle. These are still used even if what appears to be the exhaust valve lifter (or kill) is operated by a Bowden cable from that handle on Herl`s right handlebar side.

The front fork is reinforced by a single tube added to each side. This was a pretty common modification on hard workin race bikes at the time. This relived the fork from flexing sideways, hence improving stability during curves as well as straight forward.

08.01.2011;
Got an e-mail today from Perry in Canada ( http://www.ruiter.ca/mc/ ) who is a very knowledged gentleman in anything made by the Scwinn factory and a lot more when it comes to old motorbikes. He is not afraid of using neither his Super X streamline nor his Henderson De-luxe from 1927 ( http://www.hendersonkj.com/other-hens/other6/index.html ).
He informs me that this fork used on the Excelsior racer is a stock item for their military cycles named model 19. Its quality made it popular with racers as well as it was copied by others like Harley to gain the same stability.
Thanks a lot Perry for letting us learn :-)

Perry enclosed a Excelsior bulletin where this forked is described: 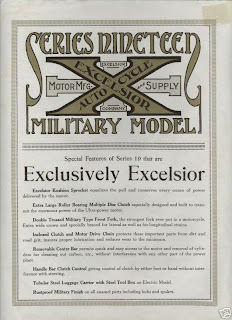