I did by chance get in contact with Ronny from the Ski / Follo district as he have collected a number of old photos related to his area, those can be found at http://www.skislekt.no/

Ronny enjoy old motorcycles and is as myself a member of NVMC. He have shared with me this fantastic photo of Eugene Holmen at right in the picture and his Harley Davidson.

Eugene`s Harley is a early twenties model whilst the other bike is a late teens. Photo is taken outside what appears to be a outlet for various electrical apparatus.
At first when I saw the poster advertising for Daytons I came to think about a recent discovery showing periodical advertising for Dayton motorcycles offered by a Kristiania (Oslo) dealer in the late teens. I`ve never seen or heard of Dayton remains in Norway and would be more than happy to learn there where some??
OK, this poster is obviously advertising an electrical product made by Dayton Electric and Mfg Company, as with the motorcycles made out of Dayton Ohio in the US. 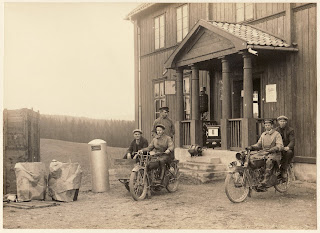