As long as I`ve been into motorcycles (that is quite a time when counting years) I have collected stickers related to the sport, dealers, clubs, whatever and so on to put on my tool locker and all over my workshops, they are every where and I like it.

OK, running into Bjørn Andre at the Ekeberg swap led to more than an interesting conversation on old US made motorcycles in general and the restoration of Bjørn Andres famous Spanjola, the multicylindered Indian based homebrew that have been presented on this blog previously.
I have been lucky enough to benefit from his skills as grapich designer to get an AMcN sticker, thanks a lot!! 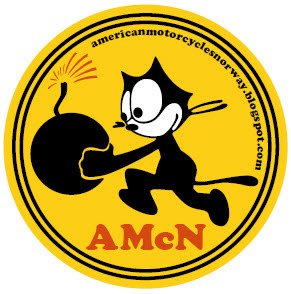 Felix, in latin "lucky". I feel lucky whenever I ride my old cicles, else why should I bother keeping them alive?
"Felix the cat", a surrealistic cartoon character borned in the late teens as a silent film star, soon to get his own cartoon. Both his films and cartoons gained enormous popularity troughout the twenties, the same years as when US made motorcycles had their heydays, the boardtracks still roared with their stands crowded by spectators and the depression was still inconceivable. The times presented to this blogs readers trough images from "Yesterdaze" and times I picture inside my head when riding my twenties era bikes.

Reaching the thirties both Felix the cat and motorcycles popularity faded, films got sound and cars where preferred instead of motorcycles.

Even if beeing a fading star Felix where still to be a popular mascot amongst those in need of "luck", such as Charles Lindbergh the aviator and keen motorcyclist (Excelsiors) who actually had a Felix the cat figure onboard his flight across the atlantic.
US-AF`s VF-3 Hellcat Fighter planes fighting during WWII had Felix the cat as their mascot, sporting Felix stickers on their cokpits.

Riding old motorcicles is pure luck as well as we all need luck dont we, riding our old scooters in todays trafic?, hence Felix the cat on my sticker.
The bomb?, lets drop it on members of the bureaucracy and
authoritarian people in general, inattentive car drivers and whoever else deserve one!
Lagt inn av American motorcycles kl. 18:22