There is a fair chance I posted this picture way back, I`ve lost track of that. Still its great when stumbling across information to a capture of unknown history like I just did when reading an issue of Aftenposten dated 31 of Jan. 1929.
Recognising the picture in the article led to frenetic searches in my files, success I found it.

This Harley JD and two more where bought brand new in 29 to allow post to be carried three times a week across the mountains and down the valleys in a route from Oppdal to Sunndalsøra in Norway. Imagine winter, snow, blizzards and freezing cold on a motorbike when the distance is no less than 70 km`s one way.
Prior to those Harleys post was shipped by boat all around the coastline to reach Kristianaia (Oslo) which took several days.

24.06.2011;
going trough some old pics on my harddisk show that the post from Oppdal to Sunndalsøra was actually brought pr. Harley during winter in 1928 too. Svein S Wammer is captured during winter at Oppdal ready to leave for Sunndalsøra with post in a pic posted back in April 2010 on this blog. 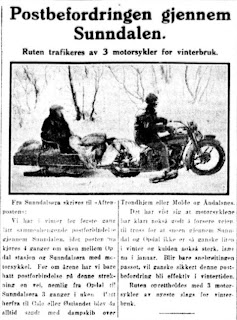 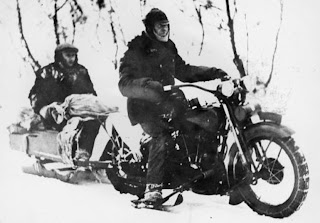