If there by chance should be anyone having followed this blog for a long time now they will remember there have been several previous posts on the Norwegian multi cylindered Spanjola.


This fantastic piece of ingenious creativity from the hands of Hydro Rjukan employed engineer Christian Larsen, whom in a few years after his employment with Hydro in 1919 would become in charge of mechanical studies for engineers at the local college.
Larsen built this machine during the early parts of the twenties, mostly as explained before by means of parts from other bikes such as Indians, Harley and Excelsior. As he was working at the Hydro Rjukan plant he was able to cast his own engine cases and manufacture other odds and ends for the engine. Rjukan was a small town overpopulated by motorcycles during the early years of Norwegian motoring, proven by photos such as the one presented earlier from a gathering amongst Rjukans sidecar riders or the fact that Hydro Rjukan used Indians to motorize their fire-brigade.

Having recently come across this high resolution scan of the Spanjola and would like to share this with you as well as some progress images from the restoration captured at the Norwegian Indian club`s meet back in 2010. 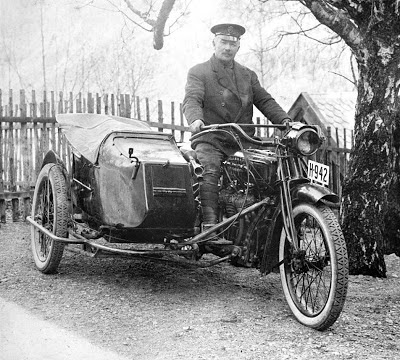 Note;
In this picture the Dog window in the front of the sidecar boot is clearly seen, this could be opened to give Larsen`s dog a view of the roads ahead as they had to rest in front of the passengers feet.

As said before, I wish Bjørn Andre all the best for the impressive job in restoring this motorcycle back to its former glory. 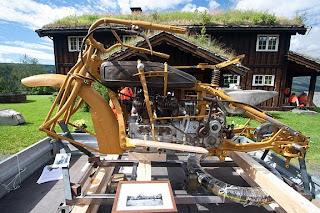 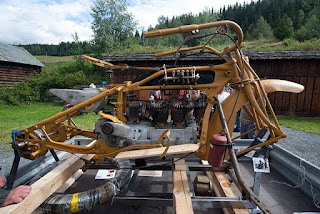 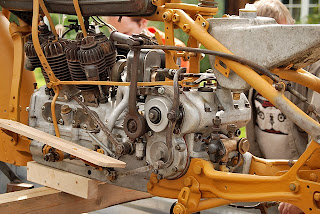 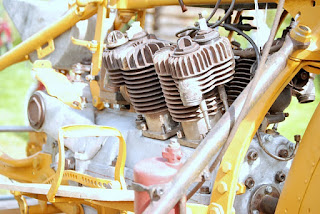 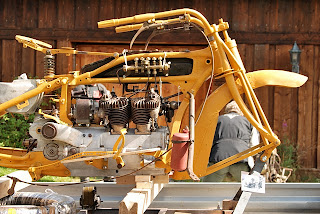