Quite a while ago I had a post including a photo showing one of the most spectacular Scandinavian racing motorcycles I have ever seen.
This was the Super X "Big Bertha" converted short frame special who once belonged to the famous Swedish racer Helmer Petterson.

Since my previous post on this blog regarding this bike (had to check when, and to my surprise it was almost two years ago, April of 2011) I have learned a lot and more pics of this very interesting bike have surfaced.

I will in this post sum up what I have learned so far regarding Helmer Petterson and his reputation as a motorcycle racer on X brand bikes.

I will start this post by re-posting the first pic I found on Helmets Super X, captured during an ice race in 1930 at Sæterviken bay near Uppsala. 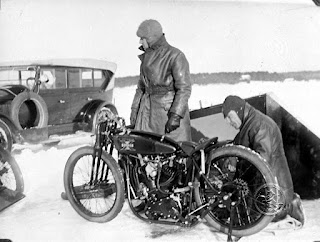 
Helmer completed his education in 1922 and he was then able to concentrate 100% on his favorite hobby, motorcycle endurance. In the start off his career he would ride various brand US bikes such as Harley, Henderson and the big X Excelsior`s.

Due to his education and his personal mechanical skills he got work at Josef Erikssons bicycle factory in Uppsala whom in addition to making pedal bikes where the Swedish general agent and in charge of importing the Excelsior brand motorcycles to Sweden.
As any other large scale motorcycle business in these days Erikssons had to have a “factory” rider in their stable, to test new models as well as make publicity and advertising for their brand name.

Helmer had his motorcycle racing debut in the May-competition event, an endurance run from Stockholm to Norrkøping. From then on his reputation as a rider grew from race to race during the period from 1921 to 1923, he entered the start line in pretty much all races in Sweden in those years.

Worth to mention is his personal achievement in the Scandinavian ISDT held in 1923, an endurance run covering various branches of the motorcycle sport trough both Sweden and Norway, in this run/race he rode a big X Excelsior handed him by his employer Erikssons. 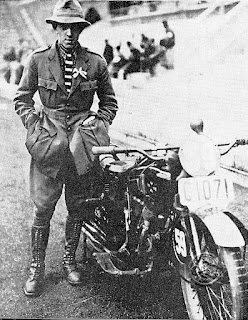 Helmer competing in the Scandinavian ISDT in 1923, a big X from Erissons by his side.

Another great win for Helmer was when he set a new his high speed record for sidecar outfits during a 1923 ice race, this record would stay for 5 years after.
In addition to his growing racing skills it is also worth to mention he was the first Swede to use spikes in his tires when high speed racing on ice (as shown in the Sæterviken pic). 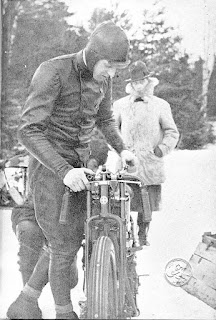 A front view of Helmers Super X racer, those handlebars are seriously narrow, spikes in the front wheel tires are seen in this picture.

In 1924 Helmer went overseas to the US, this as his engagement at Erikssons had got him a position at the Scwinn factory in Chicago. In 1924 Scwinn was one of the big three in the world motorcycle market. His factory had more than 1000 workers at this time and we can only imagine how impressed a young Helmer must have been when entering the premises at 3701 Cortland Street in Chicago. Not to forget Chicago`s population had exceeded a million since long, quite a difference from rural Uppsala I would think! 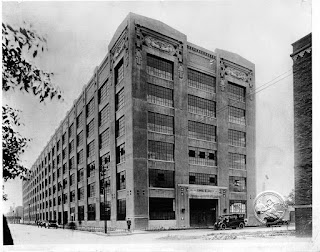 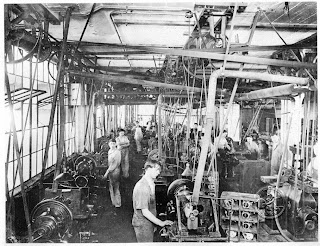 Cylinder boring and honing dept. at the X factory. 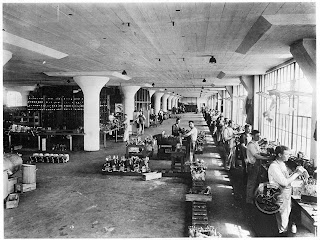 Helmers 1st position at the Scwinn factory was as a mechanic in the production, his skills was soon recognized by the staff and he would soon become an engine tuner for the factory`s dirt track team.
Helmer did succeed in this new position as well and in a short time worked himself into the positions as in charge of Excesliors race & development department. During the 1929 season one bike tuned by Helmer in person did set seven individual speed records on the Altona Speedway in Pipton Pennsylvania.

In 1928 Helmer went back to Sweden to renew his visa and apply for a permanent move to the US. Due to a slow moving system back in old Sweden, this ended up taking more than a year and a half. My personal thoughts is that Helmer brought his special Super X racer back home from the factory when leaving for Sweden in 1928, “I need to dig more into this”. From what I have learned he raced the Super X racer in both Scandinavian events as well as events further down in Europe during this period. 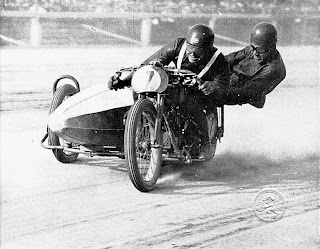 Helmer racing his Super X racer as a sidecar outfit, look at that monkey on above the rear wheel to ensure traction.

By the end of 1930 Helmer returned to the US, now his boss Schwinn gave him a new job. He would now be responsible for the Los Angeles Police corps X brand motorcycles, all Hendersons where supposed to be able to hold a guaranteed speed of 90 miles per hour (144kmh). 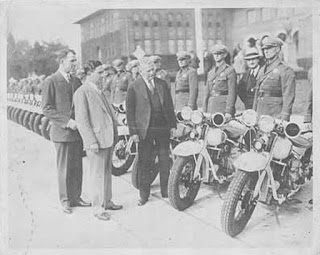 As we all know the fate of the X brand motorcycles was soon to become fatal, in 1931 it was all over due to Schwinns fear of the still growing depression in the US economy.
Schwinns famous words when entering the meet where his engineers where due to present him the upcoming news on the streamlined X bikes; "gentlemen, it is all over from today on ", would be what brought Helmer to a decision to return to Sweden in 1932.
When back in Sweden he started working with the construction of gas generators for cars as an alternative fuel. He would soon become the leading specialist in this engineering. When entering an ice race in 1934 (cars) he met a Norwegian Bugatti fanatic, John E. Isberg who was in charge of Volvo`s car sales in Norway.
These two gentlemen must have become friends in a short time as soon after helmer was mooving to Norway to work with Isberg constructing gas generators for Isbergs Bilservice in Oslo.

Not only did Helmer marry a Norwegian woman, his son Pelle was born in Oslo during the years his father worked with Isberg. The family would later move back to Sweden where eventually Pelle would become a famous industrial designer amongst many he would design the Volvo P1800.

During my two phone conversations with Pelle, now since long passed eighty years old I found it truly fascinating to learn about his father from such a close source, and little did I know the famous motorcycle racer Helmer Petterson had actually lived for years in Norway.
Not to forget Helmer worked in the building when my 1927 HendersonDe-Luxe left Courtland street, no less than a fascinating thought. 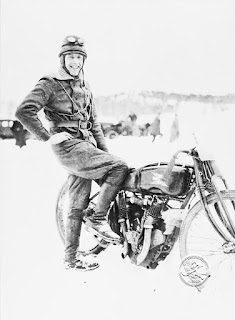 Just came across this great photo of Helmer and his racer.
Enjoy!