This is a pic that was shown in "Sidevogna" years and years ago as a small capture, here its in full size for you to view closely the details . This nice shot have to be taken in the later part of the thirties as the to Harleys are both VLD`s from 35-36. One cool detail is the registration number with just one number difference. The Indian is a 31 101, cool bike too.
Out for a ride on a sunny day bringing your girls along, bet these guys had a nice time. 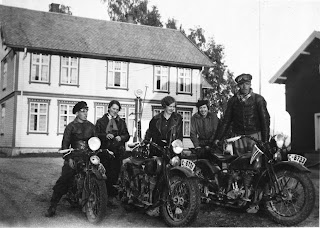 Way back in the picture is a STANDARD petrol pump. Wouldn`t mind having one of those in front of my workshop. This is most likely a Tokheim dome pump from the US. As you all should know merchant store clerk John Tokheim working in Iowa in 1898 invented the petrol pump. He is of Norwegian origin, Tokheim beeing a small farm in Odda by the Hardanger fjord.